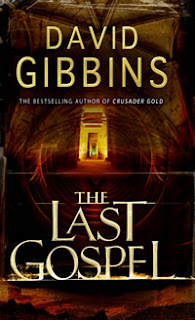 Jack Howard is about to discover a secret. Perhaps the greatest secret ever kept What if one of the Ancient World's greatest libraries was buried in volcanic ash and then re-discovered two thousand years later? What if what was found there was a document that could shatter the very foundations of the Western World? What if you were the one who discovered this secret? And were then forced to confront terrifying enemies determined to destroy you to ensure it goes no further? This is the story of one last Gospel, left behind in the age of the New Testament, in the greatest days of the Roman Empire, and of its extraordinary secret, one that has lain concealed for years. Follow Jack Howard as he discovers the secret and must prevent others from doing the same...

This is one of the toughest books I’ve read in a long time. David Gibbins pulls no punches when it comes to the depth of his research in any of his books, but The Last Gospel is something else entirely: part quest novel, part treasure hunt, part mystery adventure with strong elements of conspiracy theory to keep almost everyone happy, it is a full time learning curve which leads to an all out interesting book that keeps you reading to the very last page.

His characters have already been established in his previous novels: Atlantis and Crusader Gold and when you meet them in The Last Gospel there is an easy camaraderie between Jack and Costas that is quite real and it doesn’t feel forced. Also, each novel is standalone, so you can immediately pick up on the various characters without much hassle.

I mentioned earlier that it is one of the toughest books I’ve read in a long time, purely because of the subject matter – you are expected to do a lot of catching up on the various bits of history they follow up on, from: from St Paul to emperor Claudius to Herod to the Nazarene himself, thrown in general information about Rome as an empire, Pliny the Elder and Younger and the excavations done at both Pompeii and Herculaneum to present. A lot of history is covered, a lot of exposition, but it serves to set the tone of the book. It is an intelligent adventure story that is saved from being tedious by a plot that is tightly written and enjoyable characters. Costas is the perfect foil to Jack’s brainy comments and I found myself making my own notes to read up on Claudius, Vesuvius, Pompeii and Herculaneum.

The author, himself a marine archaeologist, draws on a lot of his own experiences, so the scenes of discovery is made to seem very real. My only gripe for this book is that the relationship with the mysterious Elizabeth is not delved into, nor her relationship with the mystery people who are involved in keeping the finds at Herculaneum secret. I would assume that the next book will no doubt deal with Elizabeth’s legacy to Jack – it will make for interesting reading.

This is an intelligent archaeological adventure thriller written by an author who clearly enjoys throwing his two heroes into the midst of a quest and then sits back to find the best way to get them out it again, by any means possible.

The Last Gospel is very much a long lazy weekend read, either by the sea or on the couch, now that the evenings are drawing near. It is a meaty and satisfying read and ticks the right boxes for this genre, especially if you are a history nut and you enjoy picking up new information to research. I really look forward to Mr. Gibbins’ next book – as the previous three have not disappointed, he will no doubt be going from strength to strength.

Find out more about David Gibbins, author and archaeologist here . The Last Gospel is published by Headline and is available at all good bookstores and online.
Who wrote this? Liz at 10:36 pm

I totally agree with this review. A rivetting read. I couldn't put it down.

Hello, this book is good. I read books of David Gibibn