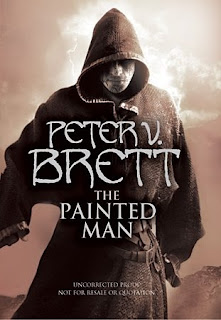 The Painted Man, book one of the Demon trilogy, is a captivating and thrilling fantasy adventure, pulling the reader into a world of demons, darkness and heroes. Sometimes there is very good reason to be afraid of the dark!

Eleven-year-old Arlen lives with his parents on their small farmstead, half a day's ride from the isolated hamlet of Tibbet's Brook. As dusk falls upon Arlen's world, a strange mist rises from the ground; a mist that promises a violent death to any foolish enough to brave the coming darkness, for hungry corelings - demons that cannot be harmed by mortal weapons - materialize from the vapours to feed on the living.

As the sun sets, people have no choice but to take shelter behind magical wards and pray that their protection holds until the creatures dissolve with the first signs of dawn. When Arlen's life is shattered by the demon plague, he is forced to see that it is fear, rather than the demons, which truly cripples humanity. Believing that there is more to his world than to live in constant fear, he must risk leaving the safety of his wards to discover a different path.

In the small town of Cutter's Hollow, Leesha's perfect future is destroyed by betrayal and a simple lie. Publicly shamed, she is reduced to gathering herbs and tending an old woman more fearsome than the corelings. Yet in her disgrace, she becomes the guardian of dangerous ancient knowledge.

Orphaned and crippled in a demon attack, young Rojer takes solace in mastering the musical arts of a Jongleur, only to learn that his unique talent gives him unexpected power over the night. Together, these three young people will offer humanity a last, fleeting chance of survival.

Knowing how much my friend Dave-Brendan enjoyed TPM, I was worried that I might not appreciate it quite as much. I try never to read reviews or opinions about books that I know I have to read - go in with a clear mind and form your own opinions, is my motto. But having met Peat and his posse in person, I also felt under a bit more pressure.

The fact that I twice missed my stop on the Underground (walking down from Baker Street to Portman Square is not a quick stroll!) and then almost ended up in Orpington on Thursday night on the last train home, because I was reading TPM, and did not hear the announcement about platform alterations...it is safe to say that The Painted Man lived up to the hype.

It was for me literally unputdownable. I resented having to leave it to the side whilst I was at work. I eventually finished reading it last after a marathon three hour session from eleven pm to one am. I couldn't bear not knowing what happened.

The thing about Mr. Brett is...he writes in a very visual way, cinematic even. I got the impression that he knew this world and his characters so well, he probably has conversations with them and a multitude of small maps to plot and plan the layouts of the cities and tiny hamlets the villagers visit.

The story is character driven, all the way. My favourite character of the three main characters the author chose to run with, has to be Arlen whom we meet as a young boy. Through Arlen we are introduced to the corelings, demons that rise as soon as the sun sets. We learn of the terror, the fear and the wholesale belief that one day a Deliverer will arise once again, like in the days of old. I loved the way we are taught this by a travelling entertainer who accompanies a Messenger to the small town Arlen grows up in. It was a very clever way of handing you the information on a platter, without it being too obvious. Arlen's subsequent flight and realisation that some men fight and some men crumble in the face of adversity is a valuable lesson and a shocking revelation. His escape from the small town to one of the Free Cities is fraught with incredible danger and makes for interesting reading. If, you are concerned about boring stories of eleven year olds growing up and being apprenticed, fear not! Yes, this is what happens but it is handled with skill and ease and before you know it, you are more than halfway through the book.

Leesha's character as healer could so easily have turned into a parody. Peter V Brett reigns himself in very tightly when writing Leesha. She could have easily been his biggest mistake in the book. But we find a strong, interesting young girl who decides to fight against what is expected of her and she chooses to march to a completely different drum. If you've ever read any of Robin Hobb's books, you will know the intense characters she creates, to the extent where you want to throw your hands up in despair because their situations just seem so dire that there is NO way they will ever get out of it, alive. I felt this way when reading about Leesha, initially but I am really happy to say that she gets out of it alive and...well, you know, go buy the book and find out.

When Rojet was introduced, I immediately thought: the last one to join the away team, which means cannon fodder. Don't get too attached. But I couldn't help it. Rojet is a true innocent initially and goes through absolute hell as a baby. He becomes a young apprentice Jongleur in one of the free cities and is beaten up on a regular basis by other performers' apprentices. But he keeps coming back and remains a true and honourable person, caring for his drunkard of a master and seeking to better himself.

I enjoyed watching the story unfold and getting to know these characters. Because you spend so much time with them, you really do get to know them well. The story runs at a good pace and because the writing is so fluent, you don't notice it. Once the three characters join up, prepare for an insane ride to the end of the book. A memorable battle ensues, friendships are forged, and quite a few storyhooks are tied up...but not all of them because, my friends, there is more to come!

The Painted Man is a strong debut from Peter V Brett and it promises to fill out the ranks of the fantasy genre in a very satisfactory way. If you like books by Scott Lynch, Mike Carey, Robin Hobb, Fiona MacIntosh and Karen Miller, you have to go and buy a copy of The Painted Man. The characters are rendered in strong vivid strokes and the world-building is very cleverly plotted. Importantly the action sizzles and fizzes and the scenes run together seamlessly, even when the years are between the chapters are indicated.

You, dear Elizabeth, are a Plague upon my bank account.

Roars with laughter. My job here is done.

Everyone should buy this book, I've almost finished it now, it is truly fantastic. Can't wait for the second book. Liz have you tried Temeraire by Naomi Novik? Peter Jackson is working on the screenplay, it is the first of a four parter and is excellent!!

I'm half way through - I wasn't sure about it in the first chapter, but it had reeled me in!! I'm now sitting at my desk with it next to me, seething with annoyance at having to work not read! Can't wait to get home tonight and finish it off, I'm not going to sleep until it's finished! Thank god I'm a fast reader....

I hadn't really read any reviews about this book when I bought it online, together with 10 or so more. It was just one more book to pass the time.
When I got home from work for dinner and decided to read something, I really wasn't expecting to stay up till I finished the book at 5:30 am...
Excellent page turner

Great review. I really enjoyed this book and can't wait to read the next one.