The Traitor Game, B R Collins 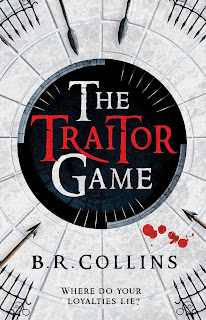 Synopsis
Michael and his friend Francis share a secret passion for Evgard, the fantasy world they have created together. But then Michael finds a note in his locker, revealing that their secret is out. He immediately suspects Francis, and tries to get revenge by telling the school bully—known affectionately as Shitley—that Francis is gay, which guarantees Francis is in for a pounding. But did Francis really betray his friend? Or is Michael really the traitor?

An intricate relationship between two friends gets highlighted in The Traitor Game and how suspicion about a perceived lie / untruth can lead to the unravelling of something genuinely good between two very different and troubled boys.

Michael had been bullied at his previous school and his mother took it on herself to find another boy who would be attending his new school, to come and visit. Enter Francis, sardonic, cool, artistic and a potential new friend for Michael.
Their friendship starts off on shaky ground, to be honest and Michael displays some odd behaviour, but Francis finds him quirky enough and sticks around, especially when he discovers that Michael has created this elaborate fantasy world Evgard, complete with maps, history, characters and political intrigue. Slowly Michael and Francis spend more and more time together and build up this world of theirs alongside their growing friendship.

The boys spend a lot of time together on this fantasy world and they trust one another not to mention it to anyone else, purely because they would be seen as freaks, labelled as weirdos and who knows what else by the rest of their peers. So they lock everything away, in a chest, with 2 locks with each one of them carrying the key to one lock.

Then one day at school Michael finds a note stuffed in his locked and the note says: I KNOW WHERE ARCASTER IS.

These five words destroy their world. Michael is torn by the shock of Francis betraying their secret to someone else. The paranoid-self steps in and he creates these awful imaginings of Francis laughing at him, whilst chatting to his other friends, saying what a sad pathetic loser he is.

Francis quite naturally reacts badly to being treated like he has some disease, with no idea why Michael is behaving so oddly. It is clear to the reader that Francis had nothing to do with betraying their secret to the world but Michael is wrapped so tightly in his cocoon of misery and anger that he can’t see it, at all. He makes up a wild lie about his erstwhile best friend, Francis, the worst possible thing he can think of, and tells the school bully. The school bully starts victimising Francis and it is with shock that Michael learns that the lie he had told Shitley, the bully, is in fact the truth, something Francis tried keeping a secret.

Running parallel to this is the story of happenings in Evgard, where a young slave, Argent, is introduced to the Dukes’ Court and where he is abused and treated badly, until he forms an unlikely friendship with the Duke’s son, Columen.

The story runs a parallel between the present and the fantasy world the boys had created. Argent betrays both Columen and his own people, the Mereish, as the story progresses and it is heartbreaking to read.

It reminded me of those feelings I got when I first read the Farseer Trilogy by Robin Hobb. It was awful – this desperateness to help this poor character; to get him out of the trouble he’s in but no matter what he does, it just gets worse and worse and no matter how much you point at the page and shout, they don’t hear you.

I liked it, purely because it is not a happily ever after Walt Disney high school story – the characters seem awful and likeable at varying stages, like any other teenager I’ve ever met (and have been myself, please forgive me), making Francis and Michael seem genuine enough. The subjects dealt with in the book is quite harsh and it is highlighted with a great ease; bullying, paranoia, angst, depression, all of these and then some gets a showing but because the author has a light touch, these never become overbearing and boring or laughable, which speaks of excellent talent.

The Traitor Game is a very dark book, resounding with deep introspection, the perils of friendship and the questions of identity, love and doing the right thing, no matter what and having to accept the repercussions of the choices you had made.
A bit about the author:
B. R. Collins is a graduate of both university and drama school. The Traitor Game, published by Bloomsbury in August 2008, is her first novel. Bridget lives in Tunbridge Wells, Kent.
Who wrote this? Liz at 7:50 pm

Bloomsbury have given me a few copies to give away. For a chance to win visit
http://bookwitch.wordpress.com