Kate Cann is the author of a range of popular teen and young adult books. She confesses to still being thrilled about winning three awards - the Angus, the Southern Schools, and the Renfrewshire Teenage Book Award for Leaving Poppy. These are the first prizes she's ever won. Here's hoping that there are a whole lot more in store! 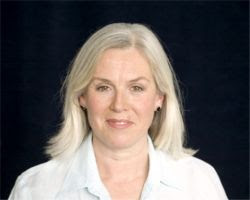 You have written a lot of YA / Teen novels over the past few years. What inspired you to start out in the genre?

Sex! I was working as a copyeditor, and doing lots of teenage stuff. I hated the way sex was dealt with. It was either abusive and miserable, or fantasy candy-floss. I decided to try and write a book that was open, honest and realistic about the amazing, growing power of a first sexual relationship, and the way it can affect all parts of your life. I loved Colette, the early 20th C French writer, in my teens. I named the heroine in the Diving In series Coll, as homage to her.

I really enjoyed Sea Change and found Chloe to be a fun main character and loved watching her grow as an individual. Where do you find your inspiration for your characters – you do seem to have the knack to make them come across as very “real”.

Thank you! I’m quite sociable, I meet and know lots of people, and they all interest me. Psychodynamics intrigue me. Characters evolve from the real and my imagination working together. I think there’s a fair bit of me in Chloe – although I was never that brave. As a teen I too was very unsure, too ready to be impressed by the glamorous …

Tell us a bit more about your newest book, Possessing Rayne.

Well, I loved writing it and found it a challenge, as it’s a mystery of sorts, so there was lots of plotting involved, lots of weaving in of suspicious threads and clues and tensions …

Rayne leaves the claustrophobia of the inner city estate she lives on, and her demanding mum and boyfriend, to work at Morton’s Keep, an old manor house. She meets a new set of friends who are very seductive, and falls for the leader, the elegant St John. But is it her or the house they’re interested in? She senses evil growing, but she’s not sure where it’s coming from. She hears dark rumours about the mysterious fire group, and the woods … ..who can she trust?

The manor house, Morton’s Keep sounds eerily creepy. Did you use any historic buildings / locales, as a blueprint for the places you wrote about in Possessing Rayne?

Yes. I spent the night in a haunted bedroom at an old manor house in Herefordshire, and I was given freedom to roam the house and grounds, too. It was utterly terrifying and incredibly useful! 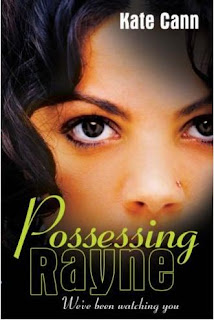 You bring across a strain of the paranormal in Possessing Rayne. Did you have
to do a bit of research to do this or did it come as naturally to you as it seems?

It came very naturally. I’ve always been interested in the veiled area beyond immediate reality.

You worked in some hints of myths and legends into Possessing Rayne and left us wanting for more at the end of the book. What does Rayne get up to in her next outing?

I’m glad you want more! I went straight into the sequel, Fire and Rayne, I had so much more to say. I wanted to develop Rayne’s link to the green lady, and look at her fraught relationship with Ethan. And I wanted a new, far more dangerous, threat to come from the house ….and Rayne having to find the strength to fight it.

Do you think moving to the countryside has influenced your writing?

I was writing Possessing Rayne while I was still in London, and I think all my yearning to be out here was reflected in my writing! Yes – the pitch black nights, the space, the hares and horses, the wildness …it’s all brilliant for me and what I’m writing now.

Have you ever attended a fire-festival or watched Morris dancing - and have you ever tried it?

The Lewes and Newick bonfire festivals had a great impact on me. They’re so wild and anarchic – all those torches marching along, rooted in half-forgotten history. I loved the idea that the old reasons for the festivals have great power, and might need to be rediscovered to keep a town safe. I drew on all this for Rayne.

I adore Morris dancing. It can be really vigorous and earthy, even threatening. I love the way it’s not slick – all ages and shapes can do it. I haven’t tried it – yet!

I get up, go for long walk in the wilds with the dog, get back, shower, have a big bowl of porridge, and write on or in the spare bed with dog at my feet. I do about four hours then I get stale and dull and have to stop.

Do you have any favourite authors?

Do you ever get the chance to visit schools and give talks?

Yes, quite often I get asked, which is lovely if a bit daunting. Fourteen year olds can be the scariest audience. But a lot of it is just bolshy body language … if the session goes well it’s the best feeling!

What are the perks - for you - being an author?

'Perks’ seems too trivial a word! I feel hugely privileged to have the space and freedom I have, to make money by making up stories, which I love to do. The lit festivals and glee trips are a treat too.

Do you ever allow yourself time away from writing and if so, what do you do to
relax and what are your hobbies?

Of course! I love walking (but that feeds into my writing) and socialising (but then that does too) ….and reading does, and films, even drinking wine …maybe I never get away from writing after all!

When you sit down to write a book, do you concentrate on a character or do you pick a concept or image and work from there?

A bit of both. Things will fertilize other things in my brain. I’ll be thinking about a theme – and then I’ll meet someone at a party – and it will all evolve. Escape, for example, grew from an image I had of an old lady reeling back in horror from a cat carrier on a Greyhound Bus – because there was an iguana in there instead of a cat …

Music. Writing for teens you must be strongly influenced by music as it is such a large part of our culture. Do you ever find yourself listening to playlists whilst writing your books?

Never. I write in the nearest to total silence I can get. I’m not actually that into modern music. It’s a flaw. I must Try Harder.

Finally – do you have any advice for young / old authors out there?

Write what stirs and fascinates you, then it will stir and fascinate other people. Keep it real – even if it’s fantasy. Try editing the next day – overnight, your brain keeps chugging over what you’ve written! Be ruthless about deleting. That descriptive scene might have taken you days but if it slows the story and adds nothing it has to go. Eavesdrop on public transport for the way people talk, their rhythms and inflexions. Have fun!

All of Kate's books can be found over at Scholastic's website or online at either Amazon or Waterstones.com.

Scholastic has also been absolutely amazing and sent along two copies of Possessing Rayne for me to give away in a mini-competition.

So, pop over to Kate's site and send me an email with the names of TWO of her other books - NOT mentioned in this interview - to the email address on the right hand side of the page. I'll have the competition run until the end of next week, 1st of August. Please put "Kate Cann Competition" in the header of the email, so I can know. Competition is open internationally.
Who wrote this? Liz at 8:08 am