Liz! in Adventures with Bookcases and some important news

I've not blogged about the madness that is my bookshelves for the longest time.

This Sunday past we had a "let's tidy the house" day which invariably means in Mark-speak: "Liz, you get to tackle the bookcases in the dining room and I'll clean the rest of the house and I'll be done before you".

I've tidied.  I "got rid" of around 200 titles.  These will either go to the charity shops down the road or to one of my blogger pals - both of whom look after libraries.   You can't actually see a that I've made a dent on the shelves, at all, which is both frightening and (I think) pretty damn cool.  Here are photos my "tidied" shelves.  There is no rhyme or reason to them - some authors are put together, but not always.  Some are by publisher, but not always. Some are literally just put together because they fit together by size - again, not always.  These shelves are all double shelved.  And these photos are only the four book cases in the dining room.  I've not yet touched the two bookcases upstairs or the three in lounge.  Please don't think I need an intervention.

Because I will fight you.

Here we go: (the text between the photos refer to the photos above the text) 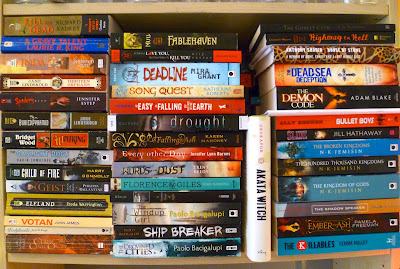 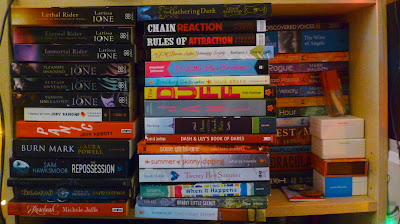 The first bookcase only has two double stacked shelves on it as it also contains our glasses and music and all my creatures which don't feature in any of these pics. 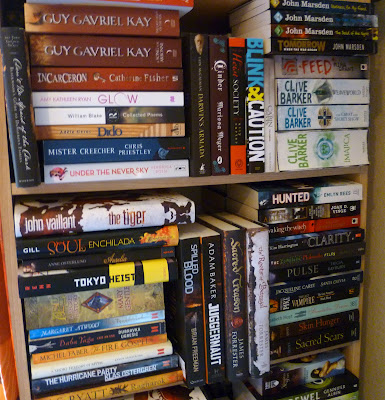 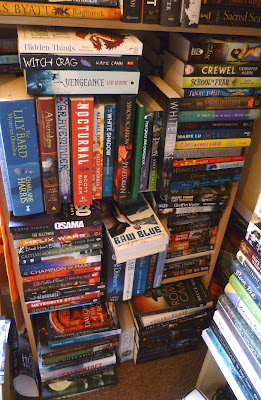 This is the second large fully stacked bookcase - a lot of hardbacks are hidden away on this behind the smaller paperbacks on the front. 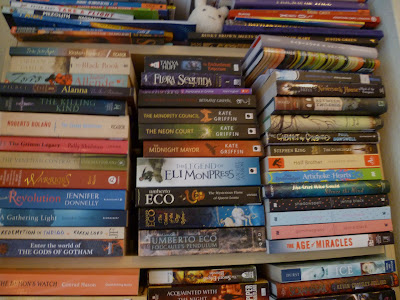 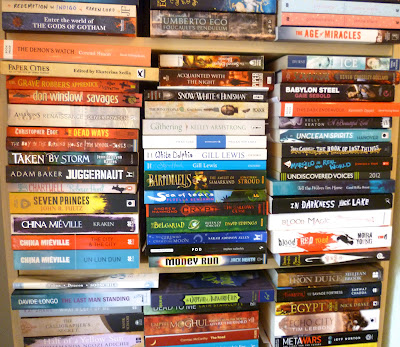 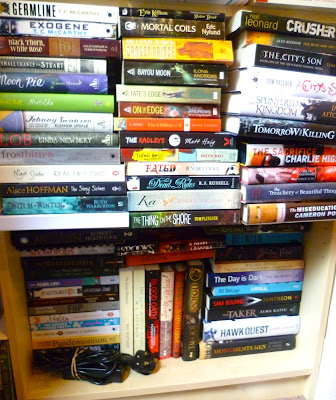 This is the bookcase that I tend to use and peruse the most - it is because (very deep this) it is directly in my line of sight when I sit at my spot at the dining room table.  Some of my favourite titles tend to migrate to this bookcase as I like looking at them.  Told you I was deep and complex. 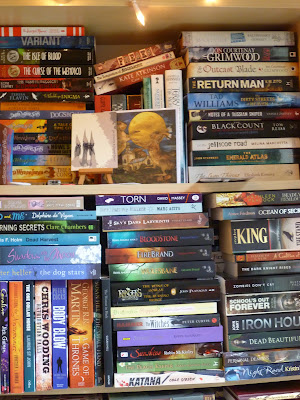 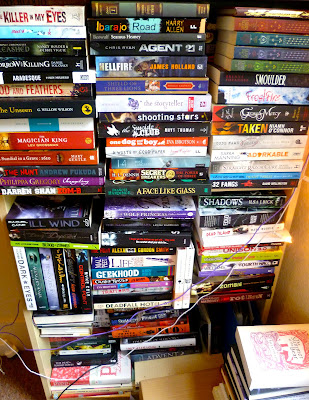 This is the higgledy piggledy bookcase - this is the one next to me so I very rarely get to see what awful state it's in.  But it's the one Mark sees from his side of the dining room table.  When this bookcase gets too much is when we have the "Liz, we need to tidy the house" talk.


Now, for a change of pace and the news:

My Favourite Books will be closing its blogging doors on 31st December 2012.

It's been a long time coming.   Mark, Sarah and I have been talking about this for some time and we decided that this would be our final year of posting reviews on MFB.  It's probably one of the hardest decisions we've had to make, yet also one of the easiest.

I've been running MFB since 2005/2006 - Mark joined later (I say "joined" but he was coerced and bribed with books) and then we met Sarah, and we got her to write some reviews, the bug bit and hey presto: Team MFB was born.

We've had possibly the best time running MFB.  We read widely, wildly and fell in love with a variety of characters, genres and authors.  We met a vast amount of truly great people and became good friends with all of them.  But this year, is definitely our last year of being online as Team MFB.

All three of us are fledgling writers.  I recently nabbed an agent which I'm ecstatic about.  I hope we get to sell my books.  Both Mark and Sarah are working hard at their respective manuscripts and building their craft.

As our lives are getting busier and our priorities are changing, we've decided that continuing with MFB would mean something will suffer - either the blog or our writing and everyday lives.  It wouldn't be fair on us or to the publishers and the authors whom we love for entertaining us.   You can't do something like blogging and reviewing half-heartedly.  Your readers can tell and if it's one thing we're super proud of, it is the integrity that's kept MFB afloat and our mad-love for well written stories by talented writers.

The three of us are girding our loins for the last reviewing stretch to the end of the year - as the shelves above show there are some fantastic books out there that we want to review and we hope we get to scratch the surface.

Hang out with us till the end of 2012 and we'll reward you with reviews, interviews and the occasional give-away.  I reckon this year we'll end up doing a big old Christmas give-away too as there will be a lot of books to go to new homes.

*cries* I knew it was coming, but I'll miss the regular 'binge-adding to my wish list'-sprees your reviews sent me on. I guess I'll just have to make sure to get to your side of the Channel so you can do that in person ;-)

Hugs for Team MFB all around!

Your bookshelves are awesome! And it's sad about you closing the blog, but it does make sense

*Weeps* Your blog was one of the first ones I ever read, the first one that made me aware of the UK book blogging scene. I totally support your decision and I know your reasons are really good, sensible ones, but still... IT'S THE END OF AN ERA. *Wails*

It won't be the same without you! *sobs* But we all desperately want to read your books too! So good luck to all three of you for the future. xx

I also knew it was coming and know only too well why, but it IS SAD. I mean really. It used to give me the nicest break from editing really weird or boring copy...Still, kudos, you three. And Liz: I see several titles I hope to borrow, if you think they're old enough to be allowed out, please! xx

I'm just glad I will still get to see you! AND of course, I'm looking forward to reading YOUR book. You've definitely got me thinking *again* about my own future.

I know I've already told you this but I will be super sad to see you close down the blog. I completely understand your reasons for it though and since I hope to own signed first editions of books with all 3 off your names on at some point in the future I fully support your decision :o) Just make sure you stay in contact and don't forget us all!

Oh my gosh, you guys! What lovely comments - I even went a bit emo. *grin* I bet you're thinking that 2013 will be a quiet year - well, be prepared to be pestered for guest review opportunities.

I'm sorry that you've to close this blog. Being a new British blogger myself, I'm realising how hard it is to make time for everything.

Aw, Liz! Totally understandable.
I wish the 3 of you much success in your writing careers!!

Knew it was coming, but still - it's sad, sad news. Lots of people do reviews out there in the blogosphere, but they're not all as considered, balanced and well-written as MFB. You will be missed by readers and writers.

Still - great news on the agent! I'm delighted for you, and look forward to hearing all the details!

Wow it looks like you have lots of books.