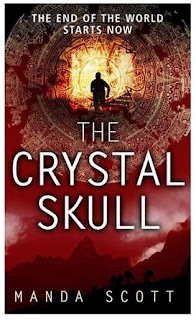 I was not at all prepared for this book. I loved her previous historical stuff and enjoyed the characters but wasn't entirely sure how she would be tackling the legends of the crystal skulls - especially with the Indiane Jones movie coming out shortly - naturally she wrote this ages before the title and plot for Indy IV had been made public. Just goes to show: the usual tapping into the dreamtree for writers and artists!
I am very happy and pleased to report that Manda Scott takes no prisoners in her newest book. It is a well written and well researched book. She comprehensively covers the legends, makes assumptions and runs with the story, embroidering on the bare bones and making it her own. She clearly states where she has borrowed and what is based on myth and legend. It is a book about a quest, about discovery and about pushing the boundaries of belief and suspending your own.
The story is set both in modern day and in the 16th Century and for me, the modern day section of the book, although well written with some genuinely good descriptive passages, just doesn't ring true for some reason. However, having said that, the parts I found myself enjoying the most relates to the travels of the young scholar Cedric Owen who was one of the keepers of the heart-stone. Somewhere along the line he seems more real and amusing than the two main modern day characters - or maybe that's just me being taken in my the Renaissance man?
This is a bit of the plot which I've copied across from Manda Scott's website to save some time:
The book opens with Stella Cody and her husband Kit searching a cave system for an ancient artefact, hidden there centuries before by Cedric Owen.
They have worked out the location of the crystal skull from a series of poems written by Owen. The skull is a remarkable sapphire cut into the shape of a human skull and it holds a great power over those who hold it, or even see it. Stella and Kit find the skull, but they are not the only people looking for it and Kit gets hurt as they try and escape from the caves.
Interlaced with the modern day plot line is that of Cedric Owen, the man who hid the skull, knowing it needed to be kept safe from the wrong hands. The skull had been passed down through his family for generations and he must continue to keep it guarded from those who would misuse it. He has several tasks he must perform to keep the skull, with its incredible powers, safe.
The skull is apparently one of thirteen skulls, recorded in Mayan prophecy. It is told that the end of the world will happen on 12th December 2012 and only if all thirteen of the skulls are in their appointed places in the world can this cataclysm be averted. The Mayan legends speak of a multi-coloured serpent which will be summoned by the skulls. Kit and Stella have to decipher Cedric Owen's notes and calculate the right place and time to place the skull.
But there are others who want to possess it and some who would destroy it. They need to figure out who they can trust and who is trying to kill them and seize the skull.
I would recommend the book as it is a good read and if you are a quest junkie like me, you will enjoy it. I think the fact that they are putting stickers on this to "Read the book before the movie" is a bit of a midirected marketing ploy, but it will find a home with many Indy and Tomb Raider fans - it has a bit more substance than some of the books out there written about various quests to find ancient artefacts and uncovering the real history of the world and such - suspend your disbelief and go on a rollercoaster ride of twists and turns. You won't regret it.
Who wrote this? Liz at 9:29 am