**Competition - Blood of the Muse** 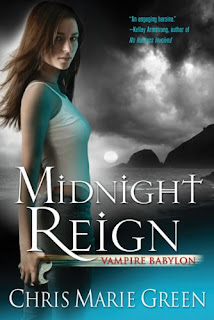 Paul over at BOTM is currently running a competition to win copies of "Midnight Reign" by Chris Marie Green.

I have copied the article below but follow the link above through to Blood of the Muse's site to enter the competition. Good Luck!


Thanks to author Chris Marie Green, we have a copy of her novel "Midnight Reign" up for grabs today. To make things even better, the book also happens to also be signed by Chris, so get those entries in today.

Now, a new slaying, bearing all the marks of a vampire attack, lures Dawn farther into the Underground and deeper into the twisted lives of those who inhabit it, just as her tenuous alliances in the sunlit world begin to shift ominously. It seems she has only herself to trust and her newfound skills as a hunter to rely on.

But Dawn will find that she is not alone--although some who stand with her stand only in the shadows...

To Enter to Win: Send an email to pstotts@bloodofthemuse.com with the subject line "MIDNIGHT" and include your name and mailing address in the body of your email. Multiple entries will be disqualified. Winners will be selected at random. No purchase is necessary. Contest is open to all participants. Contest ends: November 30, 2008 at 11:59pm PST.
Who wrote this? Liz at 3:10 pm

Email ThisBlogThis!Share to TwitterShare to FacebookShare to Pinterest
Labels: competition