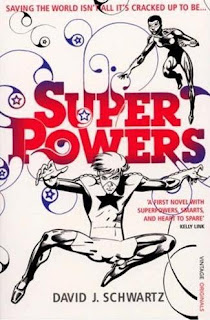 Madison, Wisconsin: In the summer of 2001, five college juniors wake up with not just a hangover, but superpowers. . . .

Jack Robinson: Grew up on a farm, works in a chem lab, and brews his own beer. Age: 19. Superpower: SPEED.

Caroline Bloom: Has a flair for fashion design and a mother who’s completely out of touch. Works as a waitress for a lunatic boss.
Age: 20. Superpower: FLIGHT.

Harriet Bishop: Studied violin, guitar, and piano and was terrible at them all. Now writes about music for the campus paper.
Age: 20. Superpower: ­INVISIBILITY.

Mary Beth Layton: Is managing a 3.8, but feels like she’s working three times as hard as the people around her.
Age: 20. Superpower: STRENGTH.

Charlie Frost: Has an anxious way about him, and always looks like he’s on day 101 of his most recent haircut.
Age: 20. Superpower: TELEPATHY.

But how do you adjust to an extraordinary ability when you’re an ordinary person? What if you’re not ready for the responsibility that comes with great power? And how do you keep your head in a world that’s going mad?

What a cool book! Seriously. I thought it was going to turn out to be a bit of a spoof about new superheroes but was pleasantly surprised when it turned out to be a well thought out pretty intense novel about friendship, tough decisions and well, superpowers.

You have to admit, we've all thought about it. Which super power would you like to have? Strength, speed, the ability to read minds or stop / reverse time like Hiro in Heroes? I always wanted to fly - probably because I thought that that would be the way to overcome my fear of heights and well, flying.

The cast of characters are average kids who go to uni, who struggle with relationships with their parents and professors. None of them are unique in any way before the event that turns them into super heroes. What I found pretty cool is that there was no attempt to try and explain the super powers. It makes the story that much more true - because seriously, think about it - if something like this happened to you, how would you go about finding out HOW you got your powers without subjecting yourself to experimentation by dodgy government scientists? And that is the one thing you do not want to do, because your life would not be your own afterwards.

They decide to form their own super hero group - the All Stars. Costumed to the nines, they set about helping police Madison and surrounds. There is an initial "honeymoon" period where everything goes well. People like being saved by their own super heroes. The police are at a loss about what to do - do they investigate the group, for being vigilantes, which is illegal or do they appreciate the help and get on with keeping the streets safe?

External and internal conflict builds up as the weeks speed by. The characters start finding it difficult to cope with their super hero powers and the facade of a normal life. They have to deal with tragedy in their midst, whilst trying to keep their identities secret from a room mate. They discover that a few decades back, another group, not unlike themselves, worked with the government during a time of crisis. The older group had gone their own way and the one person they did track down was unable to really help them, except give them more questions to their already long list.

I didn't realise, until I noticed the date at each chapter, where the book was heading - towards the awful happenings of 9/11. Once I did I thought that it was going to turn a bit farcical and sloppy, that they would somehow figure out the plot and try and save the world. Instead, like almost all of us, they become onlookers of this awful event and their world gets turned upside down even more.

Superpowers is a thought provoking novel about friendship, our innate will to do good, and our internal struggle to cope with who we are, with or without super powers.
Who wrote this? Liz at 10:12 pm

And again I wish all participants
GOOD LUCK!