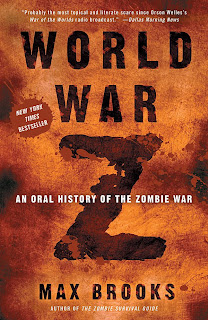 From the amazing peeps at SciFiWire:

Paramount has set Quantum of Solace director Marc Forster to helm World War Z, based on the Max Brooks best-selling novel about a worldwide infestation of flesh-eating zombies, Variety reported.

Babylon 5 creator J. Michael Straczynski is writing the screenplay, and Brad Pitt's Plan B is producing.

Brooks--the son of Mel Brooks and Anne Bancroft--wrote a detailed tale in which a researcher for the U.N. Postwar Commission interviews survivors from countries all over the world, 10 years after the crisis, to gather a first-person post-mortem on a war that obliterated every country on the map.

Paramount bought the book for Plan B in 2006, and it is one of several high-profile projects for the company headed by Pitt, who next stars for the studio in the David Fincher-directed The Curious Case of Benjamin Button.
Who wrote this? Liz at 11:01 am