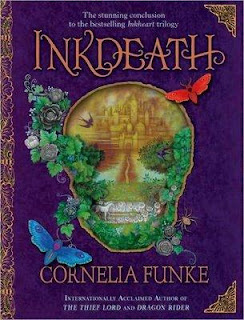 Since the extraordinary events of Inkspell, when the story of Inkheart magically drew Meggie, Mo and Dustfinger back into its pages, life in the Inkworld has been far from easy. With Dustfinger dead, and the evil Adderhead now in control, the story in which they are all caught has taken an unhappy turn. Even Elinor,left alone in the real world, believes her family to be lost-lost between the covers of a book. As winter turns to spring, there is reason to hope...

A close friend of mine, Michelle from South Africa, bought me the first book in Cornelia Funke's trilogy, Inkheart quite a few years ago, when it was first released. Michelle insisted that my obsession with books reminded her strongly of the main character, Meggie in Inkheart. Personally I thought it was rubbish - no one can possibly be as obsessed by books as I am. Yes, my friends, I had a lot to learn!

I have read Inkheart and Inkspell several times and have bought copies for other friends to read and enjoy. I have waited a good old time for the closing chapter in this amazing trilogy and I'm thrilled to say that Inkdeath does not disappoint.

Things are very different in Inkdeath, right from the start. The world is in chaos and it is a no holds barred ride mixing all the elements that Cornelia Funke has become known for - with dark obsessive characters and nightmarish events. The story highlights how people change in the face of adversity and the characterisations are at their peak.

I really am not going to give away the story lines, they are vastly complex, with a dizzying array of characters and the author's innate skill at planning and following through story arcs has to be applauded. She has many links to tie up from the two previous books and her storytelling moves you effortlessly through these, tugging the reader along at a thrilling pace.

Inkdeath is a swashbuckling story of princes, villains, lonely characters and a struggle to do the right thing, making momentous decisions or desperately trying to deal with decisions made in the past. There is the confrontation with mortality, vividly portrayed by the pressence of the White Women, and the question of reality versus imagination is raised, along with the pressing need for the characters to find a way to escape the world they are in.

Meggie remains the pivotal character in the story but we find Fenoglio struggling cope with the loss of his writing and story telling ability. In a turn of events self-obsessed Orpheus has the final copy of the Book so he is using that to his own advantage, rewriting Fenoglio's words, trying to control the story. And...well, a lot more besides. It is a must read for anyone who has started on this journey a few years ago with the publication of Inheart, especially as Inkheart movie will soon be coming out to a theatre near you (we saw an extended trailer last night on DVD and it looks AMAZING) with release dates having been set for 12th December 08 in the UK and January 09 in the US.

Inkdeath is a wild ride, buckle up and follow the story to its conclusion, you will not be disappointed.

You can find Cornelia Funke's website here with more information about all her books and movie news. Her publisher's Chicken House, can be found here.