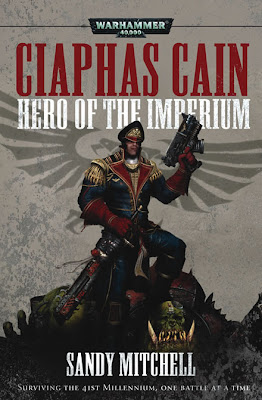 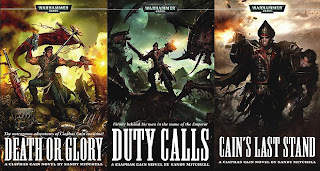 Ciaphas Cain, Hero the Imperium. Defending mankind against the myriad of enemies seeking to tear down the Imperium of Man. A stalwart champion for the people, a selfless hero who cares about the rank and file soldier fighting alongside him, an inspiration to all.

If only it were true.

Ciaphas Cain’s number priority in the dysfunctional and perennially violent 40K universe is, in fact, Ciaphas Cain. Appointed as a commissar to front line battalions, his purpose is to maintain discipline and shore up the morale of the fighting troops; not an easy task when all he wants to do is tear off towards somewhere as far as possible away from the fighting to while away the rest of his days gambling, drinking and carousing.

A thwarted act of cowardice at the start of his career is the snowball that sets everything in motion, an event given a sheen of heroism by fate and Cain’s opportunistic mindset. Cain’s predicament is a masterstroke by Sandy- given Cain’s position as commissar, cowardice is a one way ticket for a very short trip with a messy end. However, by giving him a reputation for heroism he’s forced to live up to in order to avoid being unmasked as a fraud, he creates a plausible and fertile foundation for Cain to be plunged into the thick of the action time and time again.

It’s how Cain squirms on the hook that makes the series stand out; he’s an intelligent, entertaining and well defined character who carries the story with ease.

The books themselves are presented as the collated memoirs of a long retired Cain, the texts assembled and edited by Amberley, an Inquisitor who Cain worked and fought alongside for a fair sized chunk of his career. So, while the main body of the story is written from Cain’s perspective, the chapters are interspersed with Amberley’s footnotes and snippets from third party accounts of the same events, a nice touch which imparts some extra depth and flavour.

I admit I was a bit apprehensive about tucking into a series which seemed to be angling towards a more lighthearted approach to a notoriously dark and deadly universe. However, Cain’s moments of levity and fun are strictly of the gallows variety; there’s never a doubt that he occupies the same universe as the rest of the Black Library’s stable.

All in, it’s a great series populated by believable, likeable characters and plenty of scorching action. None of the 6 books in the series (Hero of the Imperium comrises the novels For the Emperor, Caves of Ice and The Traitor’s Hand, plus three bonus short stories) disappoints; Sandy's writing is consistently entertaining and engrossing.

Not only is it all but essential reading for any existing 40K fan, it holds up as a standalone read for anyone new to the game or simply looking for some futuristic military action.

You can read a sample extract from Hero of The Imperium here (courtesy of the Black Library).
Who wrote this? Mark at 10:22 pm