Carnival of Souls by Melissa Marr 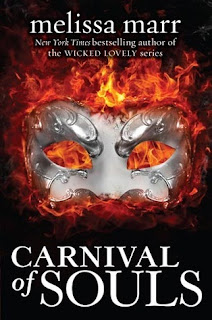 Synopsis
In a city of daimons, rigid class lines separate the powerful from the power-hungry. And at the heart of The City is the Carnival of Souls, where both murder and pleasure are offered up for sale. Once in a generation, the carnival hosts a deadly competition that allows every daimon a chance to join the ruling elite. Without the competition, Aya and Kaleb would both face bleak futures--if for different reasons. For each of them, fighting to the death is the only way to try to live.

All Mallory knows of The City is that her father--and every other witch there--fled it for a life in exile in the human world. Instead of a typical teenage life full of friends and maybe even a little romance, Mallory scans quiet streets for threats, hides herself away, and trains to be lethal. She knows it's only a matter of time until a daimon finds her and her father, so she readies herself for the inevitable. While Mallory possesses little knowledge of The City, every inhabitant of The City knows of her. There are plans for Mallory, and soon she, too, will be drawn into the decadence and danger that is the Carnival of Souls.
Straight off the back of my excitement about the new Sarah Rees Brennan book we have a new Melissa Marr. This is almost too much excitement for me to bear! The ending of the Wicked Lovely series was just perfect but I was left a little bereft - all of my favourite series coming to an end in the same year. I needn't have worried as Carnival of Souls arrived with the promise of a new world. The start of a new series is always an exciting event for me: new characters, a brand new world with rules and myths ready to be explored. Melissa Marr is brilliant at merging the recognisable with the bizarre so I wasn't surprised to find that I easily accepted that there is our world and then there is The City. In our world witches live after being banished from The City. I should say that the ones that survived made it to our world as the majority of witches were killed in the wars. In The City, daimons rule but within their world is a rigid caste system which meant that for Mallory's mother her only chance of keeping Mallory safe was to deliver her to our world.
I found Mallory an interesting character. She's been brought up to be on guard, constantly on the run and, we discover gradually, not being told the entire truth about her background. She understands that she'll never fit in to normal school life and that it's nearly impossible for her to have friends. This is why she is surprised by her connection to Kaleb - a boy who appears and starts to show an interest in her. During the first half of the book I really didn't know who to trust. I wasn't sure about Mallory's dad, Adam - but more than anyone I was very unsure about Aya. In the opening chapters Aya is preparing for her latest fight in the competition - fights which set daimons of differing classes against each other in the hopes of becoming a member of the ruling elite. Aya is determined not to marry her love, Belias, for a variety of reasons but her other option is to fight him until one of them is dead or forfeits. Initially, although I could sympathise with her anger at her lack of options I didn't agree with her actions.
This is the brilliance of Carnival of Souls. I found that just as I had made a decision about a character something happened to change my mind. Kaleb is my favourite, a cur and therefore bottom of the pile, his involvement in the competition is about long-term survival and prospects for both him and his pack mate Zevi. They have both managed to survive in The City against massive odds and have had to use everything at their disposal to get as far as they have. I haven't even spoken about the Night Market yet - an intense and dangerous place where people barter services and sell everything imaginable to get by. Zevi and Kaleb use the Night Market to make money but Kaleb has kept his involvement in the real world and Mallory secret from Zevi. As the book powers towards the end the stakes rise for every character and I had a clearer idea of which team I was rooting for. I think that Mallory will be a much more full character in the next book. Without giving away the plot she's not able to come into herself in this book which meant that I didn't fully bond with her as much as I did with Kaleb.
All this aside I thought that Carnival of Souls is a brilliant. I'm already heavily invested in the fascinating world that Marr has created and I await the next installment with excitement.
Who wrote this? Essjay at 7:30 am

Really need to get back to this one! I was really enjoying it but got distracted by other shinies.