Summertime of the Dead by Gregory Hughes 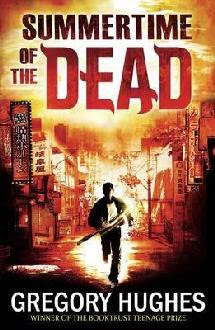 Yukio’s two best friends are dead. Tormented and blackmailed by the Japanese mafia- the notorious yakuza- they have taken their own lives. Overcome by heartbreak and fury, Yukio is determined to avenge their deaths.

So begins a deadly mission that will take Yukio on a destructive path to the rotten core of Tokyo – and to his own dark heart. But once there, will he ever find his way back?

At the start of SotD, Yukio is a really nice guy. Studious, a respected kendo fighter, respectful to his slightly out-of-touch grandmother and slowly realising that he’s falling in love with one of his best friends. It’s when he starts acting on the latter realisation that the warning lights get ready to come on. A celebration sees them brought into the orbit of the relatives of the local yakuza boss, a meeting that changes the course of all of their lives.

Once the full extent of his grief sets in and he realises that he brought them into the yakuza’s sights, Yukio’s world de-stabilises. Ingrained tenets of honour, once a wholesome part of his kendo practice, press in on his conscience, pushing him towards a darker path, one marked with revenge and slicy death.

I have to admit that for a while, SotD began to annoy me. The yakuza came across as a bit slow and insubstantial, cardboard cutout villains, kind of like the faceless mass of the Crazy 88 from Kill Bill.  But you have to realise that this isn’t about them. It’s about Yukio, and his perception of them. And as the pressures of his self imposed mission to save Tokyo put his mind under increasing strain, you begin to realise something is seriously off kilter. Once it reaches tipping point, the story simply hurtles towards its shocking conclusion in a mad ‘just another couple of pages’ rush.

Fast, engaging and laced with an unexpected streak of darkness, SotD was a pleasant surprise, one that lingered for sometime after I closed the cover.

MFB would recommend this for readers ages 14 upwards.  The violence is there, it's not gratuitous but it pulls no punches, letting the reader decide for themselves what to make of Yukio's actions.

Email ThisBlogThis!Share to TwitterShare to FacebookShare to Pinterest
Labels: gregory hughes, Quercus, ya