Q & A with Sarah Rees Brennan 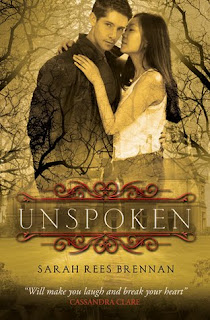 We're excited to have Sarah Rees Brennan with us today answering some questions so without further ado ...

Hi Sarah. Thanks so much for answering these questions. We're huge fans over at My Favourite Books!

Heyla. Thank you so much for having me!

Was it difficult to start a new series? Or did you have the idea for Unspoken bubbling away for ages?

Oh no, I was super excited to start the new series. I had the idea for Unspoken bubbling away for AGES upon ages... I wrote a book with a girl whose imaginary friend turned out to be a real guy when I was seventeen. Unfortunately, oh seventeen year old self, why were you not awesomer, said book was JUST TERRIBLE. I read one page of it when I decided to go back to it, threw it across the room like it was a snake, and thought I could do much better starting from scratch. I hope I did!

It was really a blast to write: being able to focus on romance, which I love, and put my own weird slant on it, was fun, and I went for a new tone so I could really kick back with my naturally goofy humour. Of course, starting a new series... having a new series published and have people read it... THAT is scary. Wish me luck!

Have you always wanted to write a Gothic novel? Which ones are your favourites?

I haven't because up until a year or so I didn't think much about the genre, despite the fact I love so many Gothic novels. I love Rebecca and Jane Eyre, and one of the modern Gothics I love is Barbara Michaels's Houses of Stone. But I didn't think, oh, these spooky houses and creepy relatives, this is a real THING, up until I was actually writing my own, when I realised that my book was THIS THING, and I went to find out all I could about it. That's how I found Barbara Michaels. ;)

There's a mass of myth-building in Unspoken: Japanese folklore, the Gothic, Nancy Drew fabulousness. Did you enjoy preparing for this series? What sort of things did you read before you started writing?

I have a whole Gothic bookcase now. There are at least two books called The Brooding Lake, and one of them is REALLY bad, but I won't say which one. ;) I've had very embarrassing phone conversations with the library. 'You owe us a fine... oh no, there must be some mistake with the computers, you can't possibly have thirty Victoria Holt books out.' 'Um... yes. Totally the computers.'

I've been to Japan, and it's a fascinating country and I tried to learn everything about it I could, and was able to pick up stories from people I talked to and books I can't get over here, though I also messed with Japanese myths in the same way I used to mess up Irish myths, in my head, in the way kids try to make their cultural stories--especially, I think, if they feel distanced from that culture and are storytelling kind of kids, as Kami is and I was--their own.

Reading up on everything was lots of fun... I wanted to say a lot of things about the books I read, and wanted to write about a girl who was a reader and invested in words the same way I was, and even have magic that had a lot to do with stories and perception. So really, my writing is always about 'STUFF WHAT I THINK IS COOL' and then I run off and get to do lots more reading on the subject. Only one problem: I have run out of bookcases.

There are a lot of linked pairs in Unspoken: Jared and Kami, Rosalind and Lillian, Rosalind and (someone I can't mention due to spoilers!), even Lynburn House has it's own link in Monkshood Abbey. Would you agree that Angela is the most isolated character as the book progresses?

I don't think I would, really, though of course authorial intent is a flawed vehicle, the writer can be entirely wrong about her own book, &c! Angela has her own pair, her brother Rusty, who she's always with, who is always loyal to her and knows all her secrets. And of course she and Kami have BFF charms, except Angela lost hers and is too lazy to look for it. ;)

But you're absolutely right that Angela is alone and vulnerable at a very bad time for her in the book... and it's true that all the characters have at least one and usually more than one natural pair, depending on circumstances, and then we look at what happens when your other half gets taken away.... Muahahaha. Muahahahaha.

Can you give us a hint of what's in store for Team Kami in the next book?

I can! Winter is coming.

... don't sue me, George R. R. Martin. In Unspoken it was autumn, and in Untold it'll be winter--there's a lot about nature in the books, and there's a theme going on. The winter of our discontent, a time of loneliness and a need for warmth.

There's also going to be lots of kissing. I'm just putting that out there. That's how trilogies work. Book one, set up, book two, make out, book three, defeat evil.

And we get a different look at several of the characters which I hope people will enjoy--more insight into Ash, Holly and Rusty especially, I think. /mysterious.

Do you feel ready to talk about the goat in the woods incident? Too soon?

The assault on my person--a lady's delicate person--by a goat small in stature but looming large in sin and aggression--still haunts me to this day. There I was sitting innocently in an orchard, after innocently climbing a large gate, and suddenly a goat came and headbutted me in the (I hesitate to use the word in polite company but...) knees. My legal team is on the hunt and once we determine Mr T. Goat's address there will be consequences and reparations made!

SOS to all innocent city girls: as you'll learn in Unspoken, the countryside is a dangerous place.

Sarah
Thanks so much, Sarah!
Who wrote this? Essjay at 7:30 am