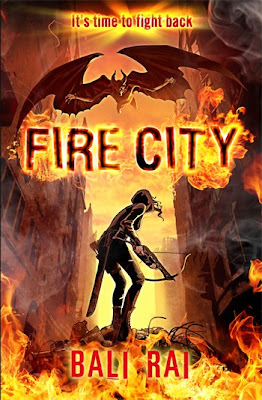 Twenty-five years ago the world changed forever. A great war, which had raged for three years ended, and the reign of the Demons began...

Within the crumbling walls of Fire City, fifteen-year-old Martha is a member of the resistance, a small band of humans fighting for freedom in a lawless and horrifying new world. Amidst the chaos of battle arrives Jonah, a handsome stranger with a thirst for revenge and a power to destroy the Demon rulers.

As Martha and Jonah's lives collide, the future of the resistance is altered forever. The battle for humankind will now begin. An epic story of catastrophe, survival and the power of humanity.

This is not like any other of Bali Rai's novels.  It's futuristic and dystopian and possibly post apocalyptic, is my feeling.  And yet, it is very much like a lot of his other novels - because it looks closely at family, friendship, responsibility, affiliations, people's reasons for doing what they do...so in that respect it's not unlike any of his other books that deal with all these issues and more.

I also think it's like his other books because the world he shows us in Fire City is broken - Bali's stories always deal with broken communities and the repercussions of those so, really what I'm trying to say is that although it's a different book (genre wise) for Bali to have written, it is also the kind of book he's always written, with the added elements of actual bad ass demons.

The world of Fire City is complex and well drawn, you can't fault him on that.  The attitude of the various characters may come as a shock to some readers: they are pragmatic and levelheaded.  If people have dreams and aspirations, it's been beaten out of them.  Hope is something you keep tucked away in your heart of hearts and never ever let it show because it could mean the difference between life and death.  Their world is small.  It exists of Fire City alone, their small community of friends.  You shuffle along, you do your thing, you don't ask questions and you keep your head down, you do not draw attention to yourself.

Our introduction to this world is through Martha's eyes - she's a local to Fire City. She knows how to toe the line, how to keep a lowish profile.  As part of the local resistance group she hunts the hunters at night...this sounds dramatic, but basically it works as follows: there are 2 kinds of people in Fire City - those who are "Wanted" (they have cushy lives and are the elite) and the "Unwanteds" and these guys and girls do all the menial labour for very little in exchange.  The demons select people to hunt during the "Hunt" from the aptly named "Unwanted" populace.  And what Martha and the rest of the resistance do during this time is hunt the demons and save as many Unwanteds as they can find.

But it's when Jonah appears during the hunt that things are kicked up a notch - here is a very able bodied young man with a devastating skillset laying waste to bad ass creatures it takes the average human a long time to kill.

From the get go we understand that Jonah has secrets - for some time before we learn his name, he is merely "the stranger" and it reminded me of the novel the movie Drive is based on where the main character is only ever known as "the driver".  The mystery surrounding Jonah and his task (to take down the head demon and as many of his cronies as he can) is pivotal to the role.

Interestingly the narrative moves away from Martha and Jonah to other secondary cast members in Fire City.  It forms a greater picture as a whole, but it did jar me a bit as I'm not used to it in YA fiction.  But then, I did get used to it and I enjoyed getting to know the various voices and you come to understand the motivations behind their actions.

Martha is a very worthy, very strong character - she has her own skillset and her own inner demons and doubts to face.  I liked that she did a lot of the saving and she took point on various missions.  I didn't however feel that her assessment of Jonah when they first met rang true.  I had my doubts, I really did, that Bali would be able to pull off the attraction she felt towards this loner boy who seemed to be this flat facade.  But then I forget the power mysterious strangers have.  You want to know what's going on...and as we learn more about Jonah we realise why he holds up this facade to the world and you understand why Martha finds him so intriguing.

Fire City pulls no punches.  There is violence.  There is the reality of characters dying in bad ways.  There is greed and hubris.  The world they inhabit is tough and therefore they have to be tough - the story develops strong and fast and the characters are tough and strong but they never ever lose their humanity. Martha especially retains a great sense of compassion when faced with the suffering of the people she knows. She's impatient sometimes, she's rude but never out of malice, unless you are her stepdad well then, you better run.

There is a lot going on in Fire City.  I'd say that if you were a boy who likes RPG games and shoot 'em ups, you'd love Fire City.  There is action aplenty and the dystopian world Bali's created is very vivid.  Similarly, if you're a girl, you'll have fun with the action but you'll revel in Martha's strength and attitude. Bali takes his time setting things out and explaining things, so even reluctant readers, who may initially be put off by the size of the book, will be able to work their way through this with a sense of accomplishment.  The packaging is clever and the book looks great.

I think Bali's proved himself here that he remains one of the UK's top storytellers for teens. Well done, Mr. Rai, you shiny star.  More power to the writing elbow!

I would really like to read a Bali Rai book sometime, I haven't heard of this one. It looks amazing! Great review! :)

I'm really intrigued by this one! I shall definitely be looking out for it!