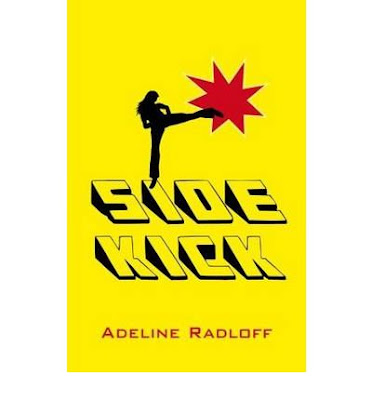 Katie Holmes, aged 17, lives with her adoptive mother, the housekeeper of a fabulous house in Camps Bay belonging to the gorgeous hunk Finn O’Reilly. Finn has the ability to stop time, to move into what is called “untime”. Katie can’t stop time but, uniquely, can function in “untime” and works as a partner, a sidekick, to Finn. When kids start disappearing, Katie uses the opportunity to strike out and try and figure things out by herself, especially as Finn is being rather...reluctant to do things.

A big thanks to Matt Imrie (teen librarian) who visited SA recently and brought me back a copy of Sidekick by Ms. Radloff.

I read Sidekick in a few hours - it's not a big book and it reads so well that before I knew it, I was saying goodbye to Finn, Katie and her mum and closing the covers.

The novel is told entirely from Katie's point of view, in first person.  Katie has to be one of the coolest (slightly clueless) together and level-headed heroines I've ever come across.  Her voice is apparent from the first paragraph and it just goes from strength to strength.

Ms. Radloff has paced the story out well so that although we get backstory and a smattering of exposition, but because it's all in Katie's voice, it's as if you're having a great chat with a new friend. We are informed what untime is, what Finn's powers are and how Katie remembers him being before a certain event that changed the way Finn behaves and why she thinks he's "broken" now. All of this is played out throughout the book.  Interestingly here, the superhero thing is important, but it's not all it's about.  It's about Katie figuring out who she is.  She doesn't mind being his side-kick, she totally is happy with that, she just doesn't know who else or what else she is, in real life.

She still goes to school and this is the place she feels apart - she genuinely doesn't fit in.  Apart from the fact that her name is Katie Holmes (and the majority of people tend to call her by her full name) she's awkward and hides in the library where it's quiet and people can't see her and tell each other she's a stuck up bitch, oh wait, they do that anyway.

When it becomes apparent that something's definitely going on, something not good, that kids are disappearing from their beds, with no trace left behind, Katie is rearing to try and figure out what's going on.  But Finn is far from interested.  If it's not getting him money or upping his profile, he doesn't care.  This is not the Finn that Katie grew up with.

The Finn she grew up with cared about everything all the time but it ran him ragged.  Until this one awful international event, where Finn couldn't help at all.  He disappeared for some time and when he came back, he just didn't seem to be the same and when a close friend of theirs died, a while before the opening of the book, he became apathetic, drinking, using drugs and getting into riskier situations.

There are some bad words said between them when Finn refuses to help and Katie and she goes off, resigns from being his sidekick and starts doing research in to the various kids that are kidnapped, checking how it was done and if they had any similarities in their backgrounds.

That's all I'll say about that because the way the story fits together is so much fun and how Finn and Katie come to work together again had me grinning.

What I liked too is how Katie explains Finn's superpower and her own.  She's the only person in Cape Town who, like Finn, can move in untime.  This is significant and a bit of a fantastic and innovative reveal.  I approved.

Sidekick is set in Cape Town and mentions a lot of well known touristy places that you can google.  I was worried that if I recommended this to you guys you may not get some of the references, but then I thought: why read something that doesn't challenge you? Things are easy enough to google or figure out within context.

One thing though: Sidekick is a great book, there is some swearing, it deals with a lot of mature themes and there is an attempted rape.  None of it is gratuitous and serves rather to underscore some important points Ms. Radloff makes.  It's contemporary YA fiction and borderless storytelling.  I enjoyed it and I hope that if you decide to buy a copy - The Book Depository has some in stock - that you thoroughly fall for Sidekick too.