The Isis Covenant by James Douglas 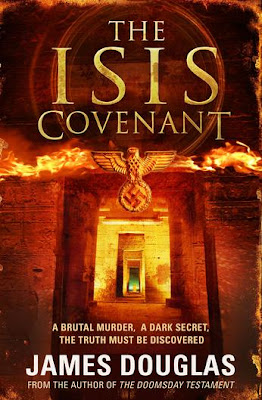 AD 1945 - In the confusion and chaos of a burning Berlin, two high-powered Nazis disappear, and so does a precious object.

AD 2009 - Two families are brutally tortured and murdered in Boston and London, the crimes linked by a single name and a shared history.

Art recovery specialist Jamie Saintclair receives a call from a Boston detective, asking for his help to investigate a brutal murder. She believes Saintclair might hold the key to solving the crime through his detailed knowledge of specialist Nazi units. But as they delve deeper into the sinister world of the occult, they uncover a dark secret that men have lusted over for more than two millennia. Long ago, in the ancient temple of Isis, something was stolen, and the repercussions have resonated through the centuries. Saintclair must discover the truth before the curse claims more victims, and finally catches up with him.

This is such a tremendously great fun quest novel.  The writing is moreish, the plot is insanely OTT and yet it all works because we are given two really great characters to follow around - Jamie Saintclair, our main character and Danny Fisher, a tough Boston homicide detective.

James Douglas weaves seamlessly legends, mythology and modern research into a solid story inhabited by a very tough very frightening villain (with a twist) and a range of backing characters that feel real and interesting.

I (stupidly) did not read the previous novel by JD featuring Jamie Saintclair but even so, I was pretty quickly caught up with what went before with a  neat bit of exposition that didn't feel forced or overwrought.  With that behind us, we went gallivanting around half of Europe with Jamie and a fantastically tough and complex Danny.

It is obvious that the two are attracted to one another and yet it's kept pretty much low key which is how I like my quest novels. There is sneaking, there is torture, there are guns, there is world-travel and there is oodles of research and World War II thieving and explosions and well, I was a happy fan-girl.

I may make it sound like this is a carefree little novel that's all fun and explosions, but I'd like to point out that it isn't.  At its core is a story of a group of men who did some awful things under a regime that most people can't speak about in anything but whispers.  The atrocities committed under the Nazis will never not make us feel sick to our core and Mr. Douglas uses this background to show us how this legacy is still something we have to deal with, all these years on.  The reveals, as they happen are shocking because they are told in a matter of fact voice, there is no need for amped up drama; the reality of what the characters are talking about is enough to make your stomach turn.

It takes a pretty adept writer to pull of a layered quest novel and I'd definitely recommend you give The Isis Covenant a whirl if you're looking for pure escapism.  There is a lot to enjoy and a lot to mull over - it is chewy, but for the right reasons.

I've just gone searching for a hi-res image of TIC and found my friend Kate's review of The Isis Covenant over at her blog - do check it out.  She's far more concise than I've been in this instance.  Needless to say: we liked it.
Who wrote this? Liz at 8:00 am

I have added this and the first book in the series to my Kindle wishlist, they both do indeed look like cracking reads. Thanks for bringing them to my attention.