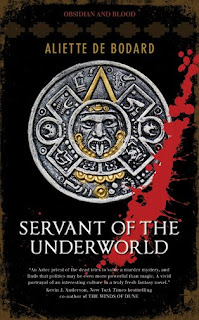 I walked back to my temple in a preoccupied mood – trying to keep my thoughts away from Neutemoc and what awaited him if I failed. My brother had brought me many problems, but so far most of those had come only from my own doings: if I had chosen the path my parents wanted for me, if I had gone to war and distinguished myself on the battlefield, they would have found no need to compare us to each other – and invariably find me, a priest with few possessions of his own, a failure too great to be encompassed in words.
I reached the temple, and found my priests still up. My second-in-command Ichtaca, who was obviously done with the vigil I’d left him, was leading a group of novice priests to one of the examination rooms. Overhead loomed the bulk of the pyramid with its shrine; and several buildings of the temple opened on the courtyard: rooms where the priests would make offerings; places where the lesser dead (those not of Imperial blood) would be honoured; closed rooms for examinations in the case of suspicious deaths; and our storehouse, a discreet, unadorned door hidden at the back of the temple complex.
The offering priest who was watching the storehouse’s entrance – Palli, a burly nobleman’s son who looked more suited for the military than for the priesthood – bowed as I came towards him.

“Good evening, Acatl-tzin. You need something?”
I nodded. “Living blood. Do you know what’s inside tonight?”
Palli shrugged. “Mostly owls. There’s probably some other animals, too.”
For what I had in mind, owls would not do – they were connected with the underworld and not with the hunt.
“I’ll take a look inside,” I said.
Palli frowned. “I can fetch what you need.”
“No, there’s no need.” Huitzilpochtli blind me, I wasn’t so respectable yet that I couldn’t find my way through a storehouse.
I picked one of the torches outside, and held it against the flame of the torch on the wall until it blazed. Then I entered the storehouse, making my way between the carved pillars. They each bore the image of a minor deity of the underworld: the hulking shape of the Owl Archer, leaning on his feathered bow with the suggestion of coiled strength; the simple, almost featureless carving of the Faded Warrior, with his obsidian-studded macuahitl sword by his side; the glittering mass of obsidian shards that made up the Wind of Knives.
I made my way through the storehouse, my torch falling on the piled riches: on the quetzal feathers and ocelot cloaks, on the jade and silver which safeguarded us from the underworld…
I felt as though I had spent an eternity in this place; and still I had seen no animals. The nahual trail in the courtyard would be vanishing further and further; and so would my chances of finding Eleuia alive. Unless…
Near the back were a series of wooden cages. I quickened my pace – but when I shone the torchlight on them, I saw that they held only owls, as predicted.
Tlaloc’s lightning strike me, did we have nothing but this? I shone the torch left and right, hoping to see more than hooting birds.
There. Near the back, two wooden cages held weasels. They pressed themselves against the bars when I shone the torchlight on them. They weren’t Mixcoatl’s favourite animals, but they would do.
I transferred them both to the same cage, and went back to the calmecac.

In the courtyard near Eleuia’s room, I knelt in the darkness, and traced a quincunx on the ground with the point of my dagger: the fivefold cross, symbol of the universe and of the wisdom contained therein. I put myself in the centre of the pattern, and started singing, softly, slowly:

I reached inside the cage for the first weasel, and slit its throat in a practised gesture. Blood spurted, covering my hands, spilling over the ground, where it pooled in the grooves of my pattern, pulsing with untapped power.

“You who seek the deer
The jaguar, the ocelot
You who hold them in your hand…”

I plucked the second weasel from where it was cowering at the back of the cage, and drew my blade across its throat. Its blood joined that of the first one: where they melded, the air trembled and blurred, as if in a heat-haze.

“You who come forth from Chicomoztoc, honoured one,
You who come with the arrows,
The spear-thrower, the grips of shell
You who seek, you who find,
Let flow the blessing of Your craft.”