Timeriders by Alex Scarrow - And Overview

I managed to bully fellow thriller and crime and historical fan, Kate Atherton, into writing an overview of Alex Scarrow's TimeRiders for our Under 14's Only feature.  Apart from Darren, over at Bookzone 4 Boys, I have not yet met another more utter rabid fan of Mr. Scarrow's books than Kate;  to the extent where Kate's sheer force of will and love for these books, makes me want to stop reading everything I'm reading to indulge in these.  That is the power of word of mouth and good imaginative writing!  I suspect August will be the month I tackle these titles.

Three teens are given a choice in the seconds before their death – choose life and become a member of an agency so secret no-one knows its name or die for sure. But this is no normal life that they’re offered. All three will live locked within a time bubble, lodged under an arch in New York City during the two days of 10 and 11 September 2001. Their job is to watch for timewaves and ripples; evidence that something has happened to alter the past and so change the present. When that occurs, they must go back in time and fix it. So Liam (Titanic 1912), Maddy (plane crash 2010) and Sal (fire 2029) are recruited by the old man Foster and joined by a seven-foot support unit, Bob, an artificial intelligence and a killing machine that they have grown in a tube within their bubble. 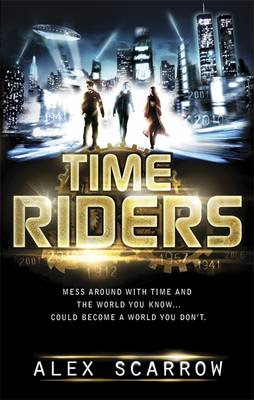 Those are the bare bones of Alex Scarrow’s TimeRiders series. Four books have now been published (the last, The Eternal War, just a few days ago) but there are five more to come and each is mapped out, just as Scarrow knows exactly how long each book in the series will take. He charts the percentage of the book done as he writes. There is no limit to what Scarrow can do with this series of adventures. The world is literally his oyster. No allowance is made for a teen readership other than less swearing. No punches are pulled in the subject either. Terrorism, Nazis, gruesome time travelling mutations, executions, zombies, Stalin gulags, grotesque monsters and brutal robots are all hurled at our young heroes as they try to unpick time and put it right, with no certainty that they will ever make it home. Perhaps more frighteningly, sometimes the worst threat they face comes from their fellow human beings. What makes these stories particularly compelling is not just the action and the pace, and each novel races along, but that many of the ‘baddies’ believe they are doing the right thing by the human race by shifting time from its present course. The world of the mid 21st century, with its piles of abandoned cars in Time Square and the flooding cities, is far from perfect.

The four novels develop the characters of Liam, Maddy, Sal and Bob – and Bob’s female equivalent Becks created for the second novel Day of the Predator – and it is each of these people who draw you in. It’s impossible not to feel for these youngsters, ripped in most cases from their families, and thrown into new times out of the most terrifying circumstances. They feel an excitement and thrill at each immersion in a time or place so far removed from their 2001 bubble but it’s always clear that their task not only ages them but it can also come very close to killing them. Once any of them have been immersed in a water tank and sent into the past, it is difficult to get them back. Windows open and close until, finally, if they miss the last opportunity six months down the line, the agent is instructed to kill Bob or Becks and retrieve their core of knowledge – their heads. 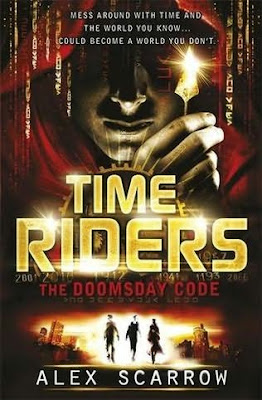 This six month period feels like a few hours to those in the 2001 time bubble trying to bring them back, but, for those lost in time, it means many days of trying to survive. Liam experiences weeks, even months in prison camps (Book 1), in prehistory stalked by dinosaurs (Book 2), fighting noble and bandit in the medieval forests of Nottingham (Book 3, The Doomsday Code) and, in the latest novel, battling to end the interminable American Civil War. And when they do finally make it back, they must watch the 9/11 disaster unfold every other day, relentlessly.

The characters that the teens encounter as they travel through time are wonderfully realised in their own right, whether they’re dinosaurs realising the possibility of their intelligence, medieval princes who are caught in a situation they cannot control and are aware that history will curse them or just everyday people who are caught out of their own time and have to be put back. 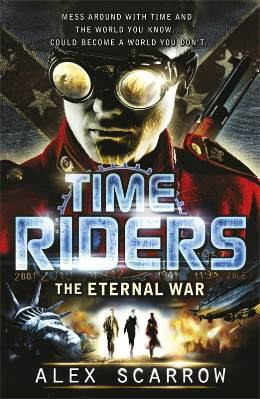 There are clues that connect the stories together and there are things to look out for (keep an eye on the shop where the heroes buy their clothes for their time travels). Other names pop up more than once and with them dire warnings of ‘The End’. It’s clear that as the books progress we will learn more about what that means.

What is the agency? Who is Foster? What is the significance of the teddy bear? What is the secret message trapped in Becks’ head? These questions and many others, along with the people who ask them, make Alex Scarrows’ TimeRiders a fascinating and riveting series of novels. The action never lets up and neither does the insight into the characters. Truly horrifying worlds are presented and yet the affection we feel for our teen warriors lightens the darkest moments and keeps us reading page after page and book after book.


***
This is the link to the superb TimeRiders website.  And this is Kate's (you star, thanks for the review) website where she reviews a great selection of books.
Who wrote this? Liz at 8:02 am

These books are certainly thrilling and sometimes gruesome: there's one scene (no spoilers!) which still haunts me. But what a brilliant concept - so simple, so full of possibilities!

Maybe the TimeRiders is a YA series.
I'm 52 and I don't care. So far I read and enjoyed all the books except ETERNAL WAR which arrived yesterday. Alex Scarrow does a great job and he includes a lot of links for adult readers.

I posted about time travel and especially about the TimeRiders series in September 2010.

There will be five more books after Eternal War and I can't wait to read them all.

These have been going really well in the library. I wish I had more time as I would love to read them too.
Terrific round-up

Thanks for such a helpful write-up, Kate. It's a fantastic primer for someone looking to hop on board!

I do hope all of you continue to enjoy the series as much as I'm enjoying writing them!

Great to see there are others out there as passionate about these stories as I am. Great post Kate!

Thank you so much for such positive feedback and for sharing my love for such a wonderful series of books. I literally counted the days for TR4 and I am not exactly a young adult myself. Like most good books, they do the trick for all readers.

Alex, I'm thrilled you read this and commented. And that I can tell you how much I love your stories! I'm very relieved there are five more to follow.

I'd write more but I'm in a tent in a field in Dorset... Thanks to you all for reading and to Liz for letting me share.