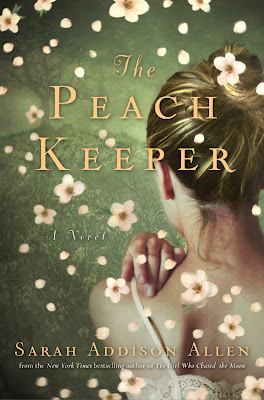 It’s the dubious distinction of thirty-year-old Willa Jackson to hail from a fine old Southern family of means that met with financial ruin generations ago. The Blue Ridge Madam—built by Willa’s great-great-grandfather during Walls of Water’s heyday, and once the town’s grandest home—has stood for years as a lonely monument to misfortune and scandal. And Willa herself has long strived to build a life beyond the brooding Jackson family shadow. No easy task in a town shaped by years of tradition and the well-marked boundaries of the haves and have-nots.

But Willa has lately learned that an old classmate—socialite do-gooder Paxton Osgood—of the very prominent Osgood family, has restored the Blue Ridge Madam to her former glory, with plans to open a top-flight inn. Maybe, at last, the troubled past can be laid to rest while something new and wonderful rises from its ashes.

Resonant with insight into the deep and lasting power of friendship, love, and tradition, The Peach Keeper is a portrait of the unshakable bonds that—in good times and bad, from one generation to the next—endure forever.

If, like me, you are intrigued by these society clubs women have in the South, that date back several generations, and wonder why exactly they came about and why they come across like secret members clubs, then The Peach Keeper goes a little distance to try and explain at least one of these societies to us.

Paxton Osgood is such a great character - she makes lists, she's obsessive about them. She's made them all her life. It is a way she controls her life, a way she can make sense of it. She prefers things to be done in a certain way. She's uptight, always well turned out and seems to be very much in charge, of everything. She is easily categorised - always popular in school, she got good grades, she was a social darling. But there is far more to the socialite than we are aware. Reluctant to move away from home, she has a very difficult relationship with her mum. Her dad zones in and out of life, letting his wife control things, as he's no doubt just found it easier to do accept what she wants to do, rather than try and fight her. Paxton, what a great name!, has a twin brother, Colin who, unlike Paxton cannot stand to be at home, with his family. He left Walls of Water to become a landscape architect and makes sure he hardly ever comes home. But this time he does, as Paxton has asked his help in landscaping the gardens at The Blue Ridge Madam, specifically to remove the huge peach tree that grew randomly from the soil near the house, and replace it with something else.

It is when Colin comes back, that he walks into Willa's life. And she's not at all happy. Willa, quiet, unassuming, runs an eco hiking and sports good store. She's lived in Walls of Water all her life, went to college, dropped out of college and moved back after her father's death. Long before that, her family had been as prominent as the Osgood's but in the time of her grandmother they had lost The Blue Ridge Madam and a lot of people had been hurt. Now, with Paxton fixing up the house, she invites Willa along to the opening gala. And Willa definitely doesn't want to go. She wants nothing to do with Madam, with the Osgoods, especially not with Colin. In school Willa used to be the Joker, the prankster, who created havoc. No one knew about it though - she did it quietly, without fuss, and watched the chaos unfold all around her. And then, one of her pranks got blamed on Colin Osgood and for a while she let it go. When she eventually revealed herself everyone was shocked - they couldn't believe it was this quiet girl who had gone about and created this much madness. As a consequence her dad lost his job at school and she blamed herself for basically destroying both their lives.

She's in Walls of Water to do a penance, to make a quiet life for herself, to hide. She refuses to have anything to do with anyone from her old life, goes home, does her laundry, never goes out and basically hides. But it's when Paxton and Colin start interfering in her life, that she stands no chance of remaining a quiet mouse too scared to live her life.

This novel is so well written, the love story between Colin and Willa is so great, along with the cautious friendship between Paxton and Sebastian, that could be more, if only he wasn't gay. The thing about SAA is that she writes characters so well, draws them so finely, and yet she manages to surprise you each time. She also excels at writing relationships and layering them and making this pattern you only see when you close that final cover and sit back and think about things.

Tied in with the story of Willa and Paxton and how their friendship develops is the story of their grandmothers as young women. I was a bit reminded of The Divine Secrets of the YA Ya Sisterhood but this is far better written, I have to say. You get such an amazing sense of place and time through her descriptions and the way the young women came up with a society to strengthen themselves and yet how now, things have changed and the society has become something so very different.

The whole of The Peach Keeper is infused with coffee and glorious food and sunshine and the mystery of the South. If you've liked any of the other books I've ever recommended, you will enjoy and come to love Sarah Addison Allen's writing. There is a magic to her books that transports you - and that's what good writing does, no matter how dull and wet the weather is outside or how miserable you feel in yourself.

Do visit her website - she has recipes and extracts from all her books on there and they make for fun reading!
Who wrote this? Liz at 7:45 am

Sarah Addison Allen is one of my favorite authors, hands down! And I loved this book. It's a toss up between this one and "The Girl Who Chased The Moon" as my most-read of hers. :)

great review, I love the sound of some of Sarah Addison Allen's books and really need to get round to reading some of them!