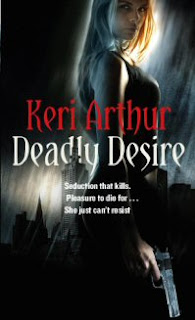 At my previous job, in the property industry, I met fellow reader and urban fantasy fan-girl, Carla Hale who became my touchstone of sanity. We would disappear into the kitchen for ages, talking about books, authors, books, authors, books, authors...you get the drift.
I supply Carla with some books which I don't have the time to read and she duly devours them in big gulps going NOM NOM NOM and loves me loads for giving her pretty books. It is a win-win relationship. All I have to do is now convince her to create an online blog or LJ account!
Synopsis:
Guardian Riley Jenson always seems to face the worst villains. And this time’s no different. For it’s no ordinary sorceress who can raise the dead to do her killing. But that’s exactly what Riley expects to find at the end of a trail of female corpses used—and discarded—in a bizarre ritual of evil. With pressure mounting to catch one fiend, another series of brutal slayings shocks the vampire world of her lover, Quinn. So the last thing Riley needs is the heat of the upcoming full moon bringing her werewolf hormones to a boil—or the reappearance of a sexy bounty hunter, the rogue wolf Kye Murphy.
Riley has threatened Murphy with arrest if he doesn’t back off the investigation, but it’s Riley who feels handcuffed by Kye’s lupine charm. Torn between her vamp and wolf natures, between her love for Quinn and her hots for Kye, Riley knows she’s courting danger and indulging the deadliest desires. For her hunt through the supernatural underworld will bring her face-to-face with what lurks in a darkness where even monsters fear to tread.
Carla says:
This is the 7th book in the Riley Jenson series and I am already looking forward to reading number 8 purely for the continuation (or maybe not?!) of the love affair between Riley and Quinn.
I found this book to be a bit on the weak side with regards to the actual story. There was a lot less mentioned about her brother Rhoan and his lover Liander who I grew to love in the other books.
There did not seem to be so much action with Riley and solving the murders - it all seemed a bit easy this time around.... but all that said.... I still cannot wait to read the next installment to find out exactly what happens with Riley and her two soul mates..
I'm rooting for Quinn all the way but reckon that her wolf side will win and Kye will be it!
Who wrote this? Mark at 12:17 pm