Black and White by Jackie Kessler and Caitlin Kittredge 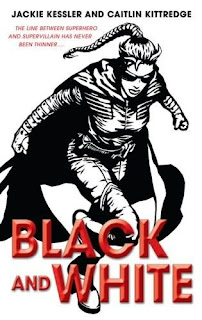 Once best friends at an elite superhero training academy, Callie Bradford--code name Iridium--and Joannie Greene--code name Jet--are now mortal enemies. Jet is a by-the-book hero, using her Shadow power to protect the citizens of New Chicago. Iridium, with her mastery of Light, runs the city's underworld. For years the two have played a dangerous game of cat and mouse.But now playtime's over. A looming evil threatens both them and the world they share. As Jet works with a "normal" man who has an extraordinary ability to make her weak in the knees, Iridium teams with a mysterious vigilante called Taser. Both Jet and Iridium are convinced that the other woman is the key to a catastrophe of apocalyptic proportions.


Three things sold me on this book: 1. the cover, 2. the fact that it was about superheroes and 3. that well, it looked like two kick-ass authors had some tremendous fun writing this and I wanted to see what they threw into the mix. I've said this before and I'll say it again: I am a fickle soul.

What I did not expect is to fall deeply into smutty love with the two main characters, Iridium and Jet!


Jet is a Shadow, a by the book superhero, mouthing platitudes and the party line like some Judge Dredd clone. Jet is also bound to go insane because of her power. This is historically accurate and references are made in the novel to her father losing it. I had a lot of empathy for Jet, readily seeing how much she is a victim of the Corp which handles the Squadron. Her utmost fear is going insane, she remembers distinctly what happened when her father gave in to the Shadow...


Iridium is a Light, wild, reckless, honest, brave and a rabid. In other words, she's a superhero that's gone rogue. She sits in the centre of a web of criminal activity in the city of New Chigago and she uses her genius intellect to remain a thorn in the side of Corp. Her father, an ex-hero, is locked away from society and she heavily feels his continuing demand on her, seeing him as an unsung hero, the one who helped everyone, not just the people Corp preferred helping.


We get to learn to know Jet and Iridium during their formative schooling years at the Academy, alongside a group of secondary characters. The novel zooms in and out of various events, highlighting the girls friendship and how they are torn apart. The novel is very cleverly set-up. There is a lot of show-not-tell and the secondary characters are used to full effect here, something I liked seeing.


Each chapter is headed by a quote and the quotes run the gamut of being amusing, interesting, to the thought provoking.

From Chapter 58
Heroes must always have someone to play the villain. Otherwise, the world have no use for them.
Lester Bradford, statement made during sentencing at his felony trial.

Kessler and Kittredge manage to keep an even balance between the two main characters - you gradually come to be immersed in their personalities and their ongoing battles. The line between hero and villain is so very slender and they have taken great pains to show this. This also reflects - obviously - real life. Things are never ONLY ever black and white, no matter how much you try to be a palladin or virtue.


The cracks in the futuristic society are subtly highlighted - nothing in this novel is in your face. It is a textbook case of how to plot, create engaging characters, keep the pace going, and then spin it all around and deliver an even a better ending than you were expecting.


I'm a bit at a loss for words to continue describing B&W as it is so much more than just a superhero novel, or rather, so much more than an incredibly well written superhero novel. So much happens to the characters and in their futuristic world, that even trying to hint at it, would contain spoilers and that, dear readers, would seriously detract from your own enjoyment of this very cool novel.


Black and White serves to set the scene, very adequately, for the rest of the series. I am looking forward to the further exploration of the current world, its history and how these superheroes will be tackling the breakdown of its society and governing principles. A very interesting and astute read and hopefully the series will encourage some who would turn their noses up at reading a novel about superheroes! Especially if they think it's kids' stuff....


I do however have one complaint and regret. I was way too keen to read this. I should have waited. A little while at least. Because then the wait for the second novel, Shades of Grey, would not have been so long!

As Black and White is part of the Summer Reads List, I am giving it a VERY conservative 8/10 stars.

I've been seeing this book a lot more recently and each person has been saying such nice things about it. I can't wait to get myself a copy and read it.

I just bought this book & can't wait to read it! Your review made me want to dig in right NOW.

You expressin a more detailed way why I want this book. It is on my list...