I am a mean and nasty person. I've been chatting to the lovely and generous Kevin Chandler on and off for quite a while now via email since we first met at an evening with Legend Press.


His new novel has just been released and instead of asking him questions, I made him come up with his own and answer them. Being the consumate gentleman he is, he refrained from calling me all kinds of nasty names and came up with an interesting blog post and kindly sent it onto me. The blog below is a result. 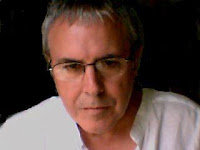 Author: Kevin Chandler
Writer and Therapist
(answers his own questions)

Does writing run in your family?


Nope. My father was a baker, my mother a barmaid. She died when I was four, so I was brought up by my father, and Aunt Nell, his childless, widowed sister. They each had the most gorgeous copperplate handwriting, Aunt Nell used hers for shopping lists and the occasional sick note for school, and the only things I ever saw my Dad write were his betting slips. I can hear Aunt Nell, turning in her grave, ‘What you? Written a novel? Luvverduck!’ She was the salt of the earth but believed in knowing your place in the scheme of things. My Dad was more ambitious, but was always let down by whatever he backed in life. He married a woman a generation younger than himself but she still died first. My father used words sparingly, as if they expensive and he was fearful of running up a huge bill. If he were alive, he would have just smiled, and felt proud.

Did you write as a child?

Only at school; I enjoyed making up stories in English, and one day wrote an essay about a boy on a volcanic pacific island running from the larva flow pouring down the hillside. I poured myself into it, but made the mistake of doing a little research in an encyclopaedia and included the name of an actual volcano and island; All your own work? was all the teacher scrawled at the bottom in red pen. I gave up writing after that for best part of thirty years. Bastard.

What made you start again, and why fiction?

The magic of words, to conjure stories that touch our hearts and minds, and make us suspend disbelief, as we find ourselves enlarged and illuminated, in the lives of the characters. Therapy is such a grand setting for fiction, with its artificial and closely defined structure, the absurdities and pomposity of its language, the small rituals and paraphernalia of the therapy room, and its mercurial capacity for healing and growth. I wanted to take the lid off, to show therapy from the inside, the best and the worst of it, revealed through a riveting fictional story. I wanted to write the kind of story that I would want to read, one that grips you, makes you want to know what happens next, one that gets under your skin, and leaves you uneasy, and wondering.”

Where do you write?
In my small study, a converted box room, looking out over Cartworth Moor on the southern Pennines above the small town of Holmfirth. I divide my time between writing and working with clients as a paid listener. Working from home, my travel costs are low, but I need to get out more!
What was the first fiction you had published?
‘Fifty-Minute Hour’, a long short story about a policeman dragged along to Relate by his female partner in a last desperate attempt to save their ailing relationship. It was one of eight stories in Legend Press’s 2008 anthology, ‘Eight Hours.’

Your first novel, LISTENING IN: A Story of Therapy and Real Life, has just been published, what’s it about?

Was it easy to get your novel published?
I got nothing but rejections for two years, and then suddenly had two publishers wanting it, Legend Press, and Accent Press. I went with the latter for the simple reason their MD, Hazel Cushion showed the most passion about it.

How do you find the work of marketing your novel?
I’m used to training counsellors so public speaking holds no fears, but it still feels odd going public with material that for so long was held between the four walls of my study. I’ve done several talks, readings, interviews and pod-casts, and for the most part, enjoyed them. The low point was at a branch of a national book chain (sod it, Waterstones!) where I was booked to do a two -hour Signing ‘n’ Selling one Saturday morning. I took up my seat at the table they had kindly laid out for me bearing a copy of the poster that also adorned the shop window. I assumed an approachable posture and put on my most enticing expression and immediately felt like an Amsterdam tart, touting for custom. A man strode in off the street, gave me a cursory, dismissive glance, and made for the far shelves. Must try harder. A woman approached from the side, making a bee-line for me. “You must be Kevin, I’m terribly sorry, our system messed up, and your books haven’t arrived. I’m afraid there’s nothing for you to sign and nothing to sell.”
No takers for my body, either. A writer’s lot.
Listening In will be part of our Summer Reads List II once we've made headway with the exiting list. Keep an eye out for the review!
Who wrote this? Liz at 12:54 pm

Kevin, given where you live are you a Clegg, a Foggy or Compo?
Great interview, what a treat!

Ha! I tend to drink my summer wine rather than watch it, besides, am more of a secret Woman's Hour listener, if truth be told.