The Eye of Sam Enthoven - the one that sees all and remembers everything!
I am a huge fan of Sam Enthoven - he's been there and done it. In fact, he's still doing it. Back in the he worked in a bookshop, saw the gap in the children's market for well written, funny and off-the-wall stories for kids and decided to try it himself. And whaddaya know, he's managed to pull it off. He is a personal hero of mine and also incredibly funny and entertaining to interview.

He has very kindly agreed to take part in the Horror Blog fest and has also offered to sweeten the deal with a giveaway, exclusive to MFB.

Please introduce yourself and tell us a bit more about you and your writing career.
Hi! I'm Sam Enthoven. I write fantastical action thrillers aimed at young people. The two you might (perhaps!) have heard of so far are The Black Tattoo and Tim, Defender of the Earth.

Tim is a giant monster smackdown in the classic kaiju style, over the course of which pretty much all London's famous landmarks are thoroughly and gleefully destroyed – MOO HOO HA HA! Um, sorry.

If you're talking about the one most recently written (as opposed to published – this one's not currently due out in shops 'til April 2010) then my latest project is a survival horror story. I visit lots of schools as part of my work: when I recently explained to a roomful of ten-year-olds that the new book is a bit like Alien meets Night of The Living Dead I was worried they maybe wouldn't get the references. Not a bit of it: they cheered! 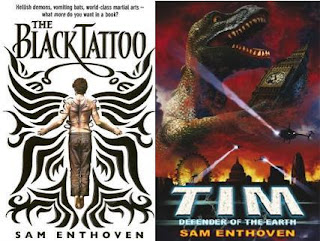 People love to be scared. Or at least, scared in a way that's supposed to stop when the film ends, the game finishes, or you put the book down.

Atmosphere and psychology are important. A payoff that justifies the buildup is crucial. But I'm a 'Show Me The Monster!' person at heart. If it's got monsters, I'm there. :D

Influences? Wow, too many to list here – but do check my LibraryThing profile if you like. Right now (April '09) I'm into Robert Kirkman's comics (smart, superfast, light touch storytelling: try The Astounding Wolf-Man – brilliant!); the Dresden Files books by Jim Butcher (I have to pace myself with those or I'd devour the whole series in one gulp) and everything by Neal Asher (Monsters! Spaceships! Obscenely large-calibre weaponry! Huzzah!) Also I just read a terrific book called Invisible Fiends, by Barry Hutchison. It's not out 'til next year but he's a name to watch, for sure.

Liz already knows my Neil Gaiman story: that was embarrassing enough. But my personal nadir in the gibbering fanboy stakes was the time I met Alan Moore [You've read his run on Swamp Thing, right? That's some of the finest horror writing ever!] His book Voice of the Fire had just been published, and until I bothered him he was quietly going around the bookshops in London's Charing Cross Road signing copies. I said, 'Mr Moore?' He turned to look at me - and I promptly lost the power of speech.

I stood there for a while like a landed fish, my lower jaw flapping

up and down uselessly. Mr Moore blinked a couple of times, then in a very kind voice said: 'Is there something you'd like to ask me?' -'YES!' I squeaked. He signed my V For Vendetta and we ended up having a wonderful and, to me, enormously inspiring chat. But it wasn't the most auspicious first impression I've ever made on someone, I imagine!

Off, except (heh!) for a very dim bloodred floor lamp I keep especially for the purpose.

The original Dawn is great of course, and the black and white Night is just unbeatable. But I'm not a 'fast zombies bad' hard-liner: I thought the Zack Snyder Dawn was excellent.

It's all about the characters. Sometimes I wish it wasn't so: characterisation is hard! But it's true. You can have all kinds of mayhem going on, but the only thing that's going to make audiences and readers really jump is if it's happening to people they care about. Not necessarily like (see above re NOTLD – genius!) But, know and believe in? Definitely.

I couldn't begin to guess. That's one of the things I love about it. And the possibility, however unlikely, that my stuff might influence a whole new coming generation of horror creators… wow, that makes me very excited!

Have you read World War Z, by Max Brooks?? If it happens, we're screwed: I'll be straight down the pub, and I ain't coming out 'til I'm zombie nosh!

I see previous interviewees have picked this already, but it's worth saying again: On Writing, by Stephen King. Never mind horror, anyone who's thinking of writing anything should read it. It is, without doubt, the single best book I've come across so far on the subject.

I don't drink tea. But if you're talking about something stronger, to be sipped, perhaps, in comfy leather armchairs, in a book-lined room, with no light but a flickering log fire and the occasional shattering flash from the storm outside, then having M R James and Saki round trying to out-spook each other would be pretty much my ideal. Hee hee hee!

Thanks and best wishes to all reading this,

Sam has agreed to let one luck entrant have a personalised copy of Black Tattoo from his personal hoard. In other words, this is a limited first edition. I know some kids who would stalk the winner if they found this out...It will be personalised to the winner. It is UK entrants only. It will run until Friday 12 June 2009. The winner will be chosen through Random.org. You will be emailed on Friday to be informed of your win and I will be sending your details onto Sam so that he can post your copy of Black Tattoo onto you.

To enter email us at: myfavouritebooksatblogspot(@)googlemail(dot)com with Black Tattoo in the subject line.


Play by the rules. Tell your mates. Read responsibly.
Who wrote this? Liz at 11:30 am

Brilliant interview (and thanks for the name check, Sam!)