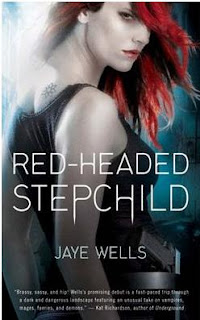 Reviewed by Skarrah (aka Lexi)

When Liz asked me if I wanted to review Jaye Wells’s RED-HEADED STEPCHILD, I pretty much ripped her arm off for the chance. I’ve been waiting for this debut and I was not disappointed.

A mission that seemed simple, if not a little inconvenient to her reputation, soon gets complicated and Sabina finds herself making friends and enemies and discovering things about herself and her family that she never even dreamed of. None of which is helped by Adam Lazarus, a sexy mage bringing her an appointment with destiny and a promise of power. Whether she likes it or not.

In a world where being of mixed-blood is a major liability, Sabina Kane has the only profession fit for an outcast: assassin. But, her latest mission threatens the fragile peace between the vampire and mage races and Sabina must scramble to figure out which side she's on. She's never brought her work home with her---until now.

This time, it's personal.

Straight off, I have to say my favourite thing about the book was the way Ms. Wells has used Biblical mythology in crafting Sabina’s world. All vampires bear the mark of Cain and an apple a day won’t keep the doctor at bay.

That and a certain demon cat.

I couldn’t put the book down. There’s conflict on just about every page and the characters are both fun and funny. I loved watching as Sabina started to question the very foundations her life has been based on. I loved seeing her deal with her new found friendships, something she hasn’t had all that much practise in. Sabina is tough, she can kick ass, but that’s not all there is to her. For a half vampire Sabina is remarkably human. It’s that humanity mixed with her ability to mop the floor with smart mouthed tough guys that sticks with you and makes you want to keep turning the pages.

Whilst there are undoubtedly some sexy bits in this book I was over the moon to find out Sabina doesn’t jump in bed with the nearest red-blooded male. No matter how appealing he may be. It’s nice to read a woman that has her priorities in order, and sex not being at the top of the list.

All in all RED-HEADED STEPCHILD is a good solid read with something for everyone. There’s mystery, romance, action, a butt load of secrets and surprises all seamlessly woven together.

You can find Jaye Wells on her website http://jayewells.com/ or at http://reluctantadults.blogspot.com/ Her book RED-HEADED STEPCHILD is available now, published by Orbit.
Who wrote this? Mark at 4:15 pm

Awesome review. I really want to read this too. I saw an ad for it in Romantic Times and fell in love...keep hearing good things these days too, so sounds like I need to go and buy a copy ASAP.

Ooh, this book looks cool. I've seen a few people in lj land talk about it, and I've been looking forward to it coming out. Thanks for the review, Skarrah! *g*