Sarah Rees Brennan: We Are Walking Over Bones: Building a Magical England

So the world knows now that I am an unashamed geeky fan-girl when it comes to Sarah Rees Brennan. I think it's because she is so very tall...no, seriously. It's because she is a hugely talented writer and a genuinly lovely person, to boot. Sarah and her publishers agreed to let Sarah pop over to MFB to do a guest blog! So, here she is, in her own words:

We Are Walking Over Bones: Building a Magical England

Fantasy set in our world is called urban fantasy for a reason: to build magic into a real place, a place people are familiar with, you have to really concentrate on that place. Otherwise it won't seem real, and the magic won't seem real either.

I'm not sure I have any simple effective guidelines for world-building - I wish I did - but I do have some thoughts. World-building in urban fantasy means examining the real world really closely, and then building a convincing model with added bits. So choose somewhere that you know well or that you find yourself wanting to get to know well.

Of course, I got the germs of the idea for The Demon's Lexicon on a walking holiday around England, and so I ended up with an idea about two brothers on the run throughout England. Landing me with two central cities, London and Exeter, and assorted locations around England.

Luckily for me, I was living near London when I wrote it, though it meant a lot of daytrips at the weekends. I took three different trips down to Exeter, where reports of me trespassing on private property may be true but cannot be proven! I still remember taking a Ghost Walk around Exeter, where standing in the shadow of the cathedral, we were told that the scattered bones of plague victims were lying beneath our feet. 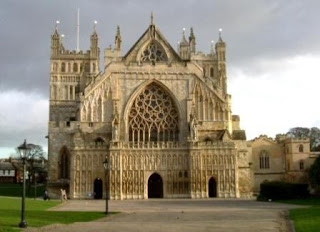 So once you're inspired by your surroundings, and you've taken a giant amount of trips and notes about them, there's the question of actually using them: of making the surroundings do your work for you: in China Mieville's Un Lun Dun, he uses the familiar landmarks of London and inverts them to signal that we're in a new and magical place: he puts giant spiders in Westminster Abbey and gives a whole new spin to the London Eye. In Neil Gaiman's Neverwhere, he posits a fantastical world lived in the in-between of abandoned Tube stations.

London's got history to burn, and the smoke ends up looking like magic. 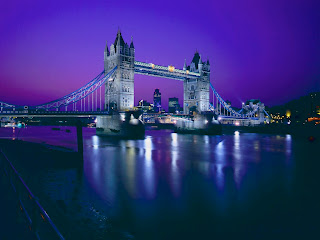 Tower Bridge is gorgeous: it has fairytale towers that turn gold in the setting sun, and it makes me happy just to look at it: so I introduced it into the story at night, in driving rain, and made the towers look like enemy fortresses to my hero Nick: turning something lovely and familiar into something awful, holding up a mirror to the landscape angled just so.

'Tell all the truth, but tell it slant,' said Emily Dickinson. Er. Not about world-building, mind you, but still: putting down everything you know and then putting your own slant on it is what seems best - most vivid, and most convincing - to me.

There is a sculpture in Exeter, on the high street, that Nick notices and thinks looks like a knife - making the scenery a little dangerous and indicating that Nick is the kind of person who sees knives in statues, who had a bit too much of an affinity with pointy objects of death.

But there's an added layer in there for people who are familiar with the city, and the sculpture. The thing standing at the heart of the city isn't a knife. It's a riddle.

So maybe I do have simple suggested guidelines for urban fantasy worldbuilding, after all.

Love it. Study it. Build it. And then work it.

I have got 2 sets of party favours to give away which we nabbed at Sarah's signing last week. These are the unutterably cool buttons to wear with pride. Please email into myfavouritebooksatblogspot(at)googlemail(dot)com for a chance to win. The competition will close on Friday, 27th June. Open world-wide!

So much history is in London, so I can see why a book taking place there would be great. :D

London, and England in general, seems like such a great setting for anything magical or supernatural. Even the shabbier elements of the place are not without their charm, I'd wager.

Side-note: A riddle, eh? Well, I wouldn't stand a chance. Riddles elude me. :)