The Legend of the Crystal Lens, Samantha Graves 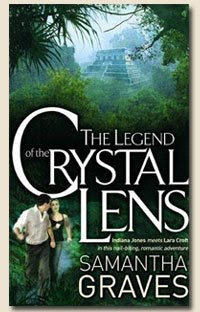 Tomb raider Simon Bonner wants out of the looting game…until a mysterious crystal lens lands on his doorstep. Legend has it that this lens holds the key to the archives of man - a Mexican tomb that explains the root of all knowledge. There’s just one problem - he doesn’t know how to use it.

Museum curator Jillian Talbot’s ability to see an object's history is her secret, so when Simon approaches her, she finds it hard to believe that she’s the seer of legend - that only she can unlock the mystery behind the crystal lens.

Journeying into the jungles of Mexico, with evil crooks hot on their tail and a growing passion between them, every move for Jillian and Simon becomes a terrifying dance with danger.

This is such an amusing feel good book. It’s a little bit romance, it’s a little bit action adventure and a whole lot of fun. It’s a deceptively quick read and the characters are fun to hang out with.

Jillian’s family are reformed thieves and she’s been the quiet studious one, getting a real job in the real world. She is however capable of packing a punch if needs be. And she’s not as shocked about being almost kidnapped (again) as she is annoyed at someone trying to kidnap her (again). Especially when she finds that the man who helps her by beating up the kidnappers, Simon Bonner, is in fact after her for his own dubious reasons.

It’s a classic – a little bit of ire, a little bit of flirting and whole boatload full of action and a supporting cast of decidedly dubious affiliations. I thoroughly enjoyed it. I have to be honest though and say that I expected Legend of the Crystal Lens to be a whole lot more in the vein of Indiana Jones and authors like David Gibbins or Daniel Easterman and Andy McDermott, where the focus is more on the adventure and the actual quest.

In Legend of the Crystal Skull the quest element is strong but the author, Samantha Graves, has a completely other agenda. That of making these two desperately different people fall in love and taking us along for the ride. I am strongly reminded of Romancing the Stone and The Jewel of the Nile – now depending on your feelings about these movies, I have either turned you onto this book or off. I hope it’s on.

Samantha Graves writes very well – her characters are unique and challenging and we had a brief email correspondence in which I told her how much I am liking this warring couple and she wrote back: “Honestly, those two were so much fun to write. Their love was really true and beautiful. A wonderful story to write.”

Once I checked out Samantha’s site, I discovered that The Crystal Lens is titled “Out of Time” in the States. I also found out that Ms. Graves is a bit of a celebrity! She was a 2009 RWA® RITA® finalist and has been nominated for a tranche of other awards and won another handful of them too. Check out her site here. I am really grateful to Piatkus for sending this onto me. I am very much aware of my lack of Romance (yes, that’s a capital R) reviews on the blog and I’m happy to combine this love story action adventure with a supernatural twist to the reviews.
Although I've not added this to the newly created Summer Reads list as I read it some weeks ago, I would happily recommend this to anyone as a holiday read. I am keen to pick up the previous novel, Sight Unseen, as it chronicles the story of Jillian's sister and her life as a notorious jewel thief. Very Sydney Sheldon! (But probably better packaged).
Who wrote this? Liz at 4:50 pm

I never heard of her. I am ashamed of myself now. Great review, and it sounds really good!

This sounds like a good read. I wonder why it has a different name in the States? That's curious, primarily because it's SO different, not just basically the same. I will have to check out both the author and the book. I likehow you describe it as a little bit action/adventure and a little bit romance -- that is reminiscent of His Edge by Wayne Harding. It's about a test pilot (former WWII fighter pilot), with romance, action adventure, lots of first-rate flying scenes, good vs. evil. It's a fast read and a page-turner -- perfect for airports and trips, now that summer is here.