The Poison Garden by Sarah Singleton 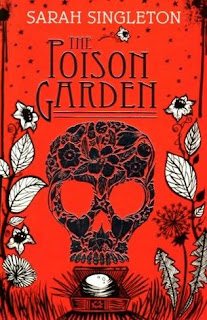 It is the 1850's, and a young boy, Thomas, leaves his family to be apprenticed to a pharmacist, at the behest of his dead grandmother. He also inherits a magical box from her, which provides him entry into a mysterious garden. But while visiting it, he sees a ghostly vision of his grandmother, who tells him she was poisoned, and warns him that he must find the person responsible, and save her precious garden. For she was one of five members of an arcane guild, each of whom cultivated an individual garden, mastering the art of poison, perfume and medicine. The guild members jostle for power as, one by one, they are murdered... can Thomas solve the mystery, before he in turn is threatened?

The Amethyst Child is not really a book that you read as much as experience. It is an absolutely gripping book which I would highly recommend reading for Sarah Singleton's deft touch with the poetic pen, vibrant characterisation and for her pure unadulterated storytelling skill.

Sarah has moved on from this almost dreamlike summer laden novel from last year to offer us a deeply dark, wonderfully Gothic novel in The Poison Garden.
Written with an deceptive ease and skill we very quickly come to know the 1850's world Thomas inhabits. We are drawn into the strange garden he discovers and to the story of the arcane guild, relatively newly resurrected and by the driven character whose shadow seems to loom throughout the novel.
The story moves swiftly and is peppered with eccentric and intriguing characters, anyone of whom could be responsible for his grandmother's death. The group calling themselves the Guild of Medical Herbalists is a small and intimate one. The suspect list is limited and as each bit of information gets added to the story, you find yourself nodding and saying "maybe him...maybe her..."
It is a competently written murder-mystery with Thomas being the central figure holding all the strands. He is a lovely creation - at first slightly shy and hesitant but his character growth is well plotted and soon we have a very capable, stubborn and ultimately a very likeable character on our hands who starts unravelling the plot and picking up clues.
Some parts are terrifically complex and surreal and I felt that younger readers may not entirely quite grasp some of the concepts, which is why this should be handed to slightly older readers who enjoy more of a challenge. There are some grisly bits, as there is bound to be, but what is most striking in this novel is the complexity of the world Ms. Singleton's created. I would have loved for the novel to be a bit longer - purely because I wanted to spend more time with Thomas - and that is entirely a personal thought.
As The Poison Garden is one of our Summer Reads, I get to score it and am happy to give it a well deserved 7.5 stars our of 10.

I had a friend in middle school who was named Sarah Singleton. Not that this is the same person, of course....