Heart of Stone by M.L. Welsh 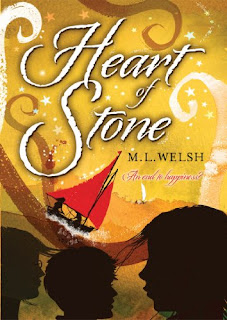 Synopsis
After a wonderful summer sailing, Verity Gallant just wants life to stay the same for ever. But as she should know by now, not everything in life turns out as we would like. The land is shifting beneath the ancient harbour town of Wellow, causing mysterious caves to appear in cliff faces, terrifying rock falls and dangerous landslides. And the earth isn't the only thing crumbling...Verity is thrilled that Jeb has returned, but their feelings for each other threaten her friendship with Henry and Martha. Once again Verity and her friends are embroiled in a tale of evil, intrigue and lost love, as a powerful force works its way towards Wellow, hell-bent on putting an end to all happiness. "The Heart of Stone" is the key, and the race is on to find it..
I love Wellow - in fact M.L. Welsh's books about Verity and her friends make me wish I was a different person - the sort that lives by the coast and has their own boat, who's confident in the water and knows Things About The Sea. I adored Mistress of the Storm and did worry if I would enjoy Heart of Stone quite as much. Well, so much for that fear - book two is even more awesome than the first. Verity is that little bit older and her confidence has grown so that she's happy to stand up for herself and the school bullies don't upset her anymore. A cliff fall and some minor accidents make it clear that Verity's peaceful summer is definitely over. Once back at school she, Henry and Martha find that there's a new science teacher - the rather pathetic figure of Brother Povl who is obsessed with the Gallant family and takes a rather creepy interest in Verity and her grandfather. It becomes obvious that the land abnormalities are more than just the result of a hot summer and everyone's future happiness is at stake.
The Mistress of the Storm wasn't the only powerful being who had an interest in Wellow. What I found fascinating about this book is that that the presence isn't a physical being in the same sense as the first book but I found it even more scary. Just because Verity and her friends can't see what is causing the disruption and unhappiness doesn't mean that there is a lack of menace - far from it. At one point I really wasn't sure who I could trust, and like Verity I wasn't sure where help would come from. The ending was breathtaking - again, I was flipping through the pages desperate to see what would happen at the end. I enjoyed hearing more about the Original Stories and these add a real lyrical edge to the book.
Apart from the main story the subplots were really engrossing. Verity and Jeb obviously have a connection but where does that leave Henry? Watching the three of them was heartbreaking and I honestly couldn't decide which one would be right for Verity - I despair at how this can ever be worked out. Although I understand that everyone is under great stress through the story I found myself getting really worked up over a comment that Martha almost made to Henry. I don't know if the question that was raised in my mind is going to be answered in the next book but I hope so! Because the three main characters are all growing up then there's going to be conflict and I found it engrossing and very bittersweet. The author has really caught that awkward time of uncertainty and first romances.
M.L. Welsh has a really wonderful website too which I spent some time looking at and getting interesting information on the influences behind the books. I'm obviously hoping for another one soon. I was lucky enough to have a proof but will be buying a finished copy at this is another book for my keeper shelf.
Who wrote this? Essjay at 7:30 am

This looks fab, many thanks for flagging it up. The synopsis reminds me a little of Susan Cooper's Under Sea Over Stone, which I love and re-read at least once a year. So this is one for my To Be Read list.