The Buried Pyramid by Jane Lindskold 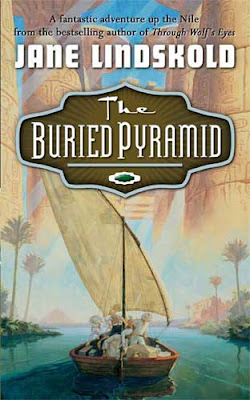 Plucky young Jenny Benet, a recently orphaned American girl who was raised on the Wild West frontier and educated at a Boston finishing school, has come to Egypt in company with her uncle Neville Hawthorne, a prominent British archaeologist. They're part of a team investigating the legendary Buried Pyramid, the tomb of the pharaoh Neferankhotep -- who may also have been Moses the Lawgiver.


But they're not the only ones interested in the site. Another party, led by the opulent and treacherous Lady Audrey Cheshire, is shadowing theirs. Someone who signs himself "The Sphinx" has been sending threatening letters -- written entirely in hieroglyphics. In Egypt, an ancient and shadowy organization seems determined to keep the tomb from being discovered.


But mortals may not be all that stands in their way.

If you are a fan of The Mummy, it's sequels or Indiana Jones in all his incarnations, then The Buried Pyramid is for you. Needless to say I thoroughly enjoyed it.

Young Jenny Benet doesn't turn up into the book for some time. The initial story is of a younger Neville Hawthorne accompanying an archaeologist into the desert, on the trail of this mythical locale he thinks he's got the map to. Very much, like the opening of The Mummy, things go badly wrong for them, and Neville and his small group have to flee the site they have found.

We then meet with Neville again he's living in England, having been retired from his life in the army due to illness. And this is where Jenny comes in, as the niece arriving fresh off the ship from America.

I was wholly prepared for a shrinking violet but instead Jenny has her own bit of history and is, admittedly, quite plucky, although I hate the word. She's a thoroughly modern miss, has an insatiable curiosity about Egypt and the world and when Neville reveals he is travelling back to Egypt on business, Jenny gets herself invited along.

The novel isn't particularly fast paced, but the writing is delicious and meaty, filled with great local details and life, and when he action does happen, it's gratifyingly brutal and quick, leaving us time to relish the aftermath. There is plenty of exposition but it's necessary. A really decent background is given for the various characters and I like that both Jenny and Neville are progressive in their thinking and how they treat locals and each other. I know it's a silly thing to mention, but I like that they are champions of the underdogs.

The mystery about the notes being sent to them is handled well - we are with them every step of the way as each one is deciphered and we get a pretty firm grounding in hieroglyphs ourselves, without realising it. And history and mythology.

Obviously not all of it is 100% true, but a lot of it is and if you have the slightest bit of interest in Egypt and the pharaohs you will enjoy The Buried Pyramid. What I also love is the fact that the book is chunky in size and standalone. One whole adventure contained in one great looking edition, which I wholeheartedly approve of.

Jane Lindskold is a new to me author and I have to say I'm really happy to have picked up her books at Forbidden Planet. I have two others by her read and I'm so looking forward to it!

Find her blog here and her website here.
Who wrote this? Liz at 7:41 am

Well look what I will be looking at in Forbidden Planet this Saturday! I do love The Mummy films and just that first paragraph had me really interested.

You did again! *toddles offto add to the wishlist*

I love what you say about this being a chunky read and standalone. I love series but sometimes I find myself wishing for a good story all done and dusted in one really good book.

I picked this up randomly at the library a few years ago. I totally agree! The book is definitely not fast-paced, and the middle dragged a bit, but the ending? Totally made up for it. I LOVED it.