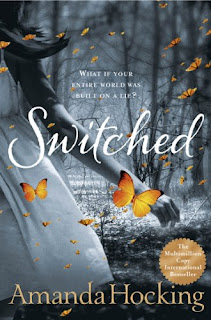 Synopsis
When Wendy Everly was six-years-old, her mother was convinced she was a monster and tried to kill her. It isn't until eleven years later that Wendy finds out her mother might've been telling the truth.

With the help of Finn Holmes, Wendy finds herself in a world she never knew existed - and it's one she's not sure if she wants to be a part of.
I would have liked to have brought this review to you sooner but my copy disappeared over Christmas only to appear in the exact place I'd left it - weird! As Liz has said, Amanda is in the UK now and signing at Forbidden Planet in London on Saturday so I was keen, once found, to get Switched read in time. The Wendy we meet is a survivor - her mum attacked her with a knife when Wendy was only six, convinced that she wasn't her child. Since then Wendy has bounced from school to school and endured constant new starts in different towns in an attempt to finish. Now living with her aunt and brother she rarely connects with anyone until she meets Finn. He gives her some devastating news that she at first resists but then has to accept. From this point onwards Wendy's life as she knows it dissolves and she's forced to face up to a new reality.
I admired Wendy from the off - she's plucky, stubborn and passionate. Although she's been deeply hurt by her past she still strives for happiness. She's also selfish but as the book progresses she starts to act more and more like a leader and I enjoyed watching her progression. Wendy's journey from everyday America to her new life is very fairytale (in the Grimm sense) and full of horror. At the start of the story I kept thinking of Tithe but as Switched progressed it was clear that Wendy's story was very different.
I particularly loved some of the people she met in her new life. The outright star of the book for me was Tove - the troubled son of the second most important family in Forening. He has insane powers, almost one of the most talented of his community but he also very troubled and alone. Much as I loved Finn I kept hoping that Wendy would see Tove differently - I was willing them together. There were moments when I could see the plot twists ahead of time which had me screaming at Wendy but despite this there's much to enjoy in Switched. Elora is wonderfully regal and distant as are many of the society that Amanda has created. I'm sure that future books will allow us to see more of the kick-ass enemies (the Vittra) and Tove (yes please).
Just as an aside - Amanda Hocking is a fellow self-confessed John Hughes mourner and when Wendy took to the dance floor with Finn to the tune of "If You Leave," by OMD I was punching the sky. Perfect.
Who wrote this? Essjay at 7:25 am

Oooh Sarah! I had tingles running right up my spine when I read the last dance had 'If You Leave' by OMD on it. I am definitely a John Hughes mourner. I grew up loving his films!
I can't wait to read this. I have one more review copy before I can dive into it.

Since the hype started around this author, I've been meaning to check out her books but just haven't had the chance yet. I think next time I get some spare money I'll go out and buy this one, so I can give it a try. It certainly does sound interesting!

I've been looking forward to reading this review, I'm now completely sold on the book :)

This book is everywhere right now! I'm definitely going to add it to my wishlist.