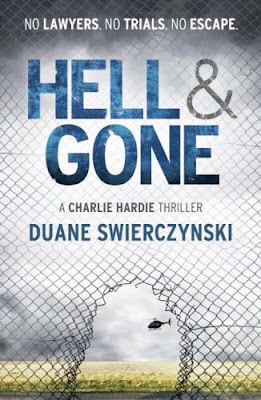 Left for dead after an epic shootout that blew the lid off a billion-dollar conspiracy, ex-cop Charlie Hardie quickly realizes that when you're dealing with The Accident People, things can get worse. Drugged, bound and transported by strange operatives of unknown origin, Hardie awakens to find himself captive in a secret prison that houses the most dangerous criminals on earth.

And then things get really bad. Because this isn't just any prison. It's a Kafkaesque nightmare that comes springloaded with a brutal catch-22: Hardie's the warden. And any attempt to escape triggers a "death mechanism" that will kill everyone down here--including a group of innocent guards. Faced with an unworkable paradox, and knowing that his wife and son could be next on the Accident People's hit list, Hardie has only one choice: fight his way to the heart of this hell hole and make a deal with the Devil himself.

Charlie Hardie is such a badass, he just refuses to lie down and die. In Fun and Games he ran afoul of the Accident People and is left for dead. But, because of the Accident People being who they are, not all is as it seems. Charlie is spirited away and literally disappears off the face of the earth, completely. No one can find him. Not his FBI buddy, not the private investigator his FBI buddy hires, no one can figure out what's happened to him. It's like the earth swallowed him up.

Charlie eventually wakes up in a place he has no recollection of ever entering. The rules are made clear. He is the new warden of this prison in the middle of nowhere. Escape is not an option. If he does try to escape everyone in the prison dies, including the guards, the prisoners, and probably Charlie's family too.

It is a big concept, huge and frightening and it obviously preys on the minds of Charlie and his prison guards, because of course there is something weird going on.

If Fun & Games entertained me with its audacity and the author's no holds barred action sequences. Hell & Gone scared the living daylights out of me by sheer force of psychological warfare. You don't know who to believe - everything is smoke and mirrors and halfway through the book you just want to lie down and cry because you can't see a way out, for anyone, without everyone dying in an horrific way.

But, of course, I am not Charlie Hardie.

There are so many twisty turns, so many conceits, that I am convinced that Duane Swierczynski is an evil genius. And if he's not one, he should be given that honorary title. As the plot strands come together and you go through several "Bloody Hell" and "ah ha!" moments, and realise how intricately layered the whole concept is, you once again want to lie down and cry because Charlie Hardie is so epically messed over, you can't see how he's going to get himself free.

But then, well, then you read on and you can only shake your head because of course there is a way out, a way free, and it's the most off the wall, insane thing you can imagine. Or rather, can't imagine.

I am a big fan of Duane Swierczynski and cannot wait for the third Charlie Hardie novel. Because I want to know what happens next. If you're looking for a random gift for a dad, or a boyfriend or the girl in your life who loves good thrillers and crimey novels, you can't go wrong buying these two novels. I promise. They are well written, pacey, so well plotted and dripping with action and sweat and blood and zinging with bullets and chase scenes, you will be exhausted by the time you're finished reading them.

Find Duane Swierczynski's website here. Both titles were out in 2011 so you should be able to find them in all good bookshops. They were published by Mulholland Books here in the UK.

Also, I've just found this quote on Mulholland Books' website from none other than Simon Le Bon who runs his own crime novel blog and I love it so much, I had to share it:

“Could not be more perfect . . . the writing is bare and taut; there’s nothing spare in Swierczynski’s prose and it’s got the pounding rhythm of a West coast punk band on crystal meth.”–Simon Le Bon (DuranDuran)
Who wrote this? Liz at 8:53 am

I love a good thriller so you've completely sold me on these :)

This book is well written with a fast pace and I absolutely loved it.