Fun and Games by Duane Swierczynski 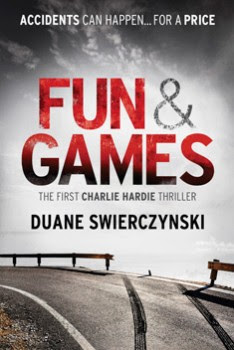 NUMBER OF ACCIDENTAL DEATHS PER YEAR
By suffocation: 3,300
By poisoning: 8,600


STAGED BY PROFESSIONALS: You have no idea.


Ex-cop Charlie Hardie's latest job is guarding an isolated mansion in LA's Hollywood Hills. But it comes with an unwanted guest - a D-list actress who says she's being hunted by professional hitmen.


The killers are real.
They've tracked her to the house.
And they're not letting anyone out alive.

It is obvious, from the very start that Charlie Hardie's life is pretty crap.  He is a melancholic figure and his house-sitting job allows him to do two things he likes: watch old movies and drink himself into unconsciousness.

But the Hollywood Hills job will turn out to be a kick in the teeth to Charlie and the carefully constructed world he lives in.

The novel opens with a young movie actress driving around late at night - she needs to clear her head as too much is going on at present in her life and she's trying to figure out how to tidy her life.  Then she notices someone following her.  She speeds up, he speeds up, comes close, then falls back again.  She puts her foot down and drives like a crazy person, to try and get away from him.  But the way the chap is following her makes little sense, so she pulls over, waves him on, but he stops.  Talks to her, seems nice.  He voices his concern for her, thinking she may be unwell, but she assures him she's okay and he drives off.  Lane sighs with relief and carries on with her drive.  On the highway, very early, at dawn, she is in an altercation with the same driver and as someone climbs into the car to see if she's okay, she sees a needle in the "samaritan's" hand and acts purely on instinct: she takes the crumbled windscreen glass from her lap and smashes it into this person's face.  She gets out of the car and runs for her life.

Enter Charlie, blissfully unaware of the fact that the house he is about to house-sit already has an uninvited guest: Lane.  She attacks him, under the impression that he is one of Them.  As they start sorting out their story, things are taken further by the team outside the house because of course the house is being watched by the bad guys and they know Lane is in there, but who is this new guy?  As Charlie and Lane struggle to not kill each other and figure out what's going on, we are privy to the other team's swift decisions and actions and we know things are going to go very bad very quickly. There is a lot of story here, but it doesn't feel it because the other keeps such a tight reign on the characters and the exposition.  The pace is furious and it felt like I was reading and experiencing everything in real time.  Only some of the very best thriller writers can pull something like this off and the author is definitely one of those.  As the kill team come to realise that Charlie Hardie is not just another chump they can take out without much hassle, we are privy to Charlie and Lane's desperate efforts to make it out of the house alive and to stay alive.

Charlie really is such a great hero - he is completely screwed up, he has issues up the wahzoo and he is utterly real. His reactions, his thoughts and how he takes all this crap that's come his way and how he just does not stay down and then takes the fight to them - man, it's brilliant stuff.

I thoroughly, wholeheartedly enjoyed Fun and Games and have become a big fan of Mr. Swierczynski in the process - chief among those reasons as to why I like him: he is devious and clever and he plays both his readers and his characters perfectly.  I believed the entire story from start to finish and am wondering if he knows something that we don't know about the Accident Police - these mysterious They and Them.  The novel is a mix of the best of Quentin Tarantino and the Coen Brothers but it is wholly Swiercynski.  There are bits of fantastic humour, it is tense, tightly plotted and utterly moreish.  I'd recommend this as a holiday read - at any time of the year - but I'd hasten to add that you should make the effort to wait until they are all out in the UK so you can read them all in one swathe.  As it stands, I have the second Charlie Hardie novel at home.  And I cannot wait to get my teeth into it.

Find Duane Swiercynski's website here - and what I didn't know until someone mentioned it to me on twitter, he is also a well known comic / graphic novel writer! My crush just grew by 50%.
Who wrote this? Liz at 8:14 am

This sounds so good! Thank you for the warning to wait for all of the books :)