I became a fan of Malinda Lo because of Ash, her first novel. I initially fell in love with the cover and bought in the US hardback purely because it blew my mind. I did not read the hardcover. In fact, it is utterly pristine and on my shelf. No, instead I bought the UK paperback of Ash and read it in one sitting. Since then I've followed Malinda's blog closely and not only do I think she's an amazing writer and brimful of talent, I like how she does not back down and how she keeps challenging herself and her audience. But more importantly, I like that she is always telling stories.

Onto my review for Huntress. 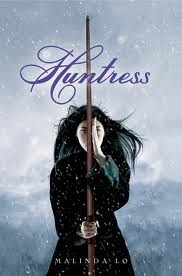 Nature is out of balance in the human world. The sun hasn't shone in years, and crops are failing. Worse yet, strange and hostile creatures have begun to appear. The people's survival hangs in the balance.


To solve the crisis, the oracle stones are cast, and Kaede and Taisin are picked to go on a dangerous and unheard-of journey to Tanlili, the city of the Fairy Queen. Taisin is a sage, thrumming with magic, and Kaede is of the earth, without a speck of the otherworldly. And yet their two destinies are drawn together during the mission. As members of their party succumb to unearthly attacks and fairy tricks, the two come to rely on each other and even begin to fall in love. But the Kingdom needs only one huntress to save it, and what it takes could tear Kaede and Taisin apart forever. . .

In Huntress, we very early on learn that something bad is set to happen to one of our characters, Kaede. Young Taisin sees it in a vision and it is this vision that changes both their lives irrevocably. Taisin is a trainee mage, a seer, and whilst Kaede is also at the academy she's a bit rubbish at the more intellectual things and instead is sent to help the cook in the kitchen and tend the garden, even though she is of high noble birth. The two girls have no real reason to talk or meet as their lives are very different, as Taisin is a truly gifted apprentice and undergoes a lot of her training privately.

But it is when Taisin has the vision of Kaede in deep peril, followed by the King turning up at their academy with Kaede's noble father in tow and both men in deep distress about a summons from the Queen of the Xi (pronounced like we would pronounce the Celtic Sidhe / shee) that Taisin realises it is all somehow connected.

Kaede is ordered by the king to journey with his son, Prince Con, a handful of guards and of course Taisin to meet with the Queen of the Xi in order to determine what it is that is going on in both their worlds causing the crops to fail and for winter to cling to the lands.

As the small group journeys along, Taisin and Kaede have the chance to get to know each other a bit better. Their friendship is hesitant, reluctant and as the attraction between the two girls blossom, it is contrasted with the young prince Con's very obvious attraction to one of his guards, a young capable woman who is a bit cheeky and tough, but all round cool and lovely. Con's obvious romantic heart made me worry for him. He is a great character and is really the party's impulsive, passionate, heart whilst both Kaede and Taisin represent the more wary, the more dutiful side of that passionate heart.

The writing is wonderful. Malinda Lo is a born storyteller and few enough authors can pull off a travelling quest as it many will treat it as just a journey from point a to b. But what Ms. Lo gives us is a chance to get the know the characters really well, she showcases the dire straits the people and the land find themselves in, and by doing that, we become more and more invested in the small group's survival and journey. We honestly care about them and we want them to succeed in their quest.

The Xi are wonderfully eerie and supernatural and I loved them. When their queen reveals what she requires of our small group of travellers they are shocked but nevertheless decide to carry on, for the sake of both their worlds. And of course, it is here that Taisin realises what the vision she had right at the start of the novel means.

I cried, I laughed and I loved. Huntress is an incredible novel of friendship, love, loyalty and duty. It is a far more complex and far more tense novel than Lo's debut novel, Ash. I love being able to sit down with a book by an author whom I've loved in the past, and then subsequently reading that second or third or fourth book and come away feeling a bit floaty, having seen that author grow from a pretty damn good writer to someone who rocked my reading world. Three authors have done that recently - Malinda Lo and Kirsten Cashore and SJ Bolton.

So, in case you've not figured it out yet, you should buy Huntress. Even if you've not read Ash. They are companion novels but you do not have to know the one to read and enjoy the other. Find Malinda Lo's website here. Huntress is out now here in the UK from Atom.
Who wrote this? Liz at 8:42 am

Ahh. I've had this book for ages and every time I look at it, I feel a little guilty that I haven't read it as yet. I will, I will. Sooner rather than later, especially after reading this review :)

*goes off to buy Huntress* I read Ash when it came out and enjoyed it but struggled with it a bit. However I am always open to try an author's work again and I do trust your judgement, so I will give it a go.