The Sleeping Army by Francesca Simon 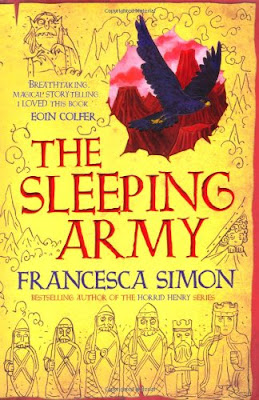 Freya is an ordinary girl living in modern Britain, but with a twist: people still worship the Viking gods. She’s caught in her parents’ divorce, and shuttling between bickering adults is no fun. One evening, stuck with her dad on his night shift at the British Museum, she is drawn to the Lewis Chessmen and Heimdall’s Horn. Unable to resist, she blows the horn, waking three chess pieces from their enchantment; the slaves Roskva and Alfi, and Snot the Berserk. They are all summoned to Asgard, land of the Viking gods, and told they must go on a perilous journey to restore the gods to youth. If Freya refuses she will be turned into an ivory chess piece but, if she accepts her destiny and fails, the same terrible fate awaits her.

Firstly, the look and feel of the book in your hand is great. The cover is rough, it feels a bit like antique paper and the artwork is superb. It already sets the tone for the book. It's also not a full-sized paperback and the print is decent sized, so even for reluctant readers this is a great gift.

Freya as a main character is so great - she's grumpy, annoyed that her parents are full of it, and all she really wants to do is have a quiet evening. Instead she's been handed over to her Dad who forgot that his shifts at the museum had changed and so she has to spend time at the museum, after dark.

When she is left to her own devices, she strolls around and notices the horn suspended from the ceiling near the chess pieces. And she thought: hey, I wonder if I can blow it? And so she does, but quietly. Only thing is, it doesn't come out as quiet. There is a tremendous noise, masses of confusion and then the next thing she knows, she's tumbling through the air with her dad shouting her name. And then she lands, somewhere else, with three companions and a horse with too many legs.

So begins the very epic story of Freya's reluctant quest. She is indeed very much the reluctant hero. Her call to take up the journey is not one she wants, at all. She is genuinely just a girl, who is clearly very ill equipped to become The One to try and save the gods from eternal destruction. What doesn't help is the fact that the two servant/slaves with her along with the berserk warrior Snot don't hold her in high esteem, at all. She's seen as a nuisance, a hindrance. Not really someone they want on their side, to try and save themselves and the world.

As their journey continues, after a very odd conversation with Odin and his dying crew of gods, it becomes clear that this Asgard, this world they are travelling through is far bigger than Freya could have imagined. She used to be a bit of a passive believer in the gods and yet know, having seen them for real, she doesn't have much choice and they are both more AND less than what she expected.

The quest is set up through a variety of tasks that they need to perform to reach their goal. Yes, I am being very non-committal about what exactly this entails but I love the cleverness of the characters and how slowly but surely (very slowly) they come to work as a team to reach their final destination and not just that, but they figure out how to help Freya get to her goal.

But of course, things aren't as easy as that. Not in a true hero's quest anyway.

The book made me grin and frown and growl. Sometimes all at once. (No one came near me on my commute whilst I did this). I both liked and disliked the characters, just like you do in real life with some people, when they get under your skin. A lot happens throughout the book, and is quite rapidly paced, but never so that your mind feels cluttered.  The fact that we are given an alternative religious history here, that the old Norse gods are our gods and that the Christian god and his son are a new religion is very interesting and far from being controversial, and it really does make one think what would have happened if...

The world is still ours - we have cars and mobile phones and all the modern paraphernalia associated with our current lives, except for this one crucial thing, that in Freya's world, we bow to the Allfather, old Odin and his cronies.

I enjoyed The Sleeping Army - Ms. Simon has a very light touch when it comes to working the alternate history and religious bits and you are never given a theology lesson and it just works so well.  She's integrated the modern and the old very nicely and Roskva and Alfi are our point of reference for the way things were in the long distant past so as a reference, that works well as we can identify with both of them, as well as Freya.

The conclusion to the novel made me grin - it is a true quest story in which the hero manages to save the day and then some (other shenanigans too) other random things happen that you may not suspect.

I think that readers 9+ would really enjoy this and that some older readers (especially adults) who like things a bit Viking and Norse, will be pleasantly surprised because although the novel is aimed at younger readers, there is a lot of great mythology to be relished here as well as world building and action.

The Sleeping Army is out now - brand new - and would make a perfect gift come Christmas for that hero / heroine in your life, regardless of age.
Who wrote this? Liz at 8:30 am

You might just have persuaded me there! Sounds great - and it's nice when the book feels and looks good too. Might be slipping this into somebody's stocking...

What an interesting sounding book! I don't think I've ever read anything viking-y, but the sound of this quest makes me think I'd enjoy it.

I like the sound of this. I'm looking for books that have some resonance with some stories I've written and this might hit the spot. Thanks!