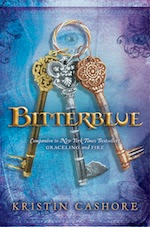 Isn't this a gorgeous cover?  It belongs to Kristin Cashore’s upcoming new novel Bitterblue. This is of course the US cover and we've not yet seen the UK cover.  Personally, I don't care what the cover looks like (weird for fickle me, I know) I am just so excited about reading Bitterblue.  Kristin Cashore's writing is dreamy and gorgeous and rich and deep.  I loved Fire and I fell in love with Graceling and I just can't come up with enough words to describe how her writing blew me away.  I actually told a friend recently that when I grow up, I would love to be able to write like Kristin Cashore.

I digress, more about Ms. Cashore and Bitterblue:

I was over at Publishers Weekly and the article caught my eye, here's a bit of an excerpt:

“I was thrilled when I saw the keys and that they look a little like weapons,” Cashore told PW in a phone interview. “It’s absolutely the best icon for this book, although I better not say more about that. I love all the covers but this one is my favorite.”


Dial will publish Bitterblue, a companion to Cashore’s bestsellers Graceling (Harcourt, 2008) and Fire (Dial, 2009) on May 1, 2012 but this first look at the cover ought to tantalize her many fans.

The novel, which has an announced first printing of 200,000 copies and clocks in at a hefty 576 pages, picks up eight years after Graceling,with Bitterblue now 18 and the reigning queen of Monsea. Cashore says the story constitutes more of a companion than a strict sequel. Graceling fans, however, will likely be thrilled to learn that the heroine of that book – the different-colored-eyed Katsa – returns in Bitterblue, as does her lover, Po.

For Cashore, the completion of her third novel allows her to take a deep breath – of relief. “Fire was such an emotionally hard book for me to write that when I started Bitterblue I vowed to write something light and fun,” Cashore said. “I was well into it before I had the realization that if light and fun is what you’re after you probably shouldn’t have a main character whose father murdered her mother.”


Indeed, nothing about the process of completing Bitterblue turned out to be light or fun. The first draft took nearly three years to write, and was met with a long revision letter from her editor, Kathy Dawson.

“There was one line [in Dawson’s editorial letter] that nearly caused me to panic, but turned out to be exactly the right piece of advice,” Cashore recalled. “[Kathy] wrote, ‘Would you ever consider starting from scratch?’ And that was what I needed to do. I needed to start over now that I knew exactly where the story was going. The plot didn’t change dramatically but the way everything came together did.”

Cashore certainly is her own tough act to follow. Graceling found a place on three Best Books lists in 2008; Fire received six starred reviews, including one from PW.

“With every book she writes, Kristin becomes a more accomplished writer,” says Dawson, who acquired and published Graceling while at Harcourt, and is now associate publisher and editorial director for fiction at Dial. “For this one, she learned all about codes and ciphers. She even hired a linguist to create an entire language! It felt like a long waiting period, but Bitterblue was worth every single minute.”

If you've not yet read these books...I urge you to go out and buy them immediately.  They are aces.
Who wrote this? Liz at 4:29 pm

oohh, interesting, I don't know any of them! A ready-made trilogy waiting to be read - yum.