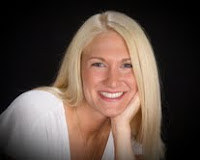 I’m a later-in-life athlete.  You know the girl in gym class who can’t pass any of the physical fitness tests?   The one who has ‘bad cramps’ or something similar that prevents her from participating… pretty much every week?  That was me in high school.  Exercise was not something that I ever did voluntarily; I much preferred to keep my nose in a book and enjoy daily after-school naps.  It wasn’t until years later, shortly after my second daughter was born, that it occurred to me that I might need to, you know, do something with myself if I wanted to stay healthy.
Those days were also the most stressful times of my life so far.  I had two little children, an infant and a toddler born less than two years apart.  My husband worked full-time, traveled often for work, and attended graduate school.  We’d just moved to a new city where I didn’t know a soul.  I was miserable, and I had no way to vent my anxiety and frustration.
We also lived right next to a large park with miles of trails.  One afternoon, desperate to get out of the house, I figured I’d give running a shot.  I think I lasted all of seven or eight minutes before I had to stop; I was out of breath, every part of my body hurt, and at that moment I told myself I would never, ever run again.  But… I hated the fact that I’d failed so spectacularly.  So once the initial discouragement wore off, I decided that I wanted to get better, if only to prove to myself that I could.
In the weeks that followed, I continued to go running every time I had the opportunity.  My mileage slowly increased.  Six or seven months later, I was running for at least an hour a day – often for two hours or more - and I absolutely loved it.  I was hooked.  About a year after I ventured out on that initial, disastrous run, I finished my first marathon.  I know now that I can never give it up; when I go more than two days without getting outside for a workout, my mood plummets.  All I can think about is putting on my shoes and disappearing for awhile, leaving all the stressors in my life behind, if only for an hour or two. 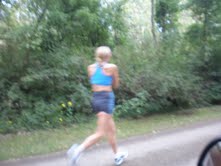 I’ll never forget my husband asking me once, “What do you think about when you’re running for so long?”  I gave the question some thought, and then I answered him with, “Nothing.  I don’t think about anything.”  It’s true, too; running clears my mind unlike any other activity.  I can be in a foul mood when I take those first few steps out the door, but let me get a few miles out and all the tension, stress, negative energy, anger – whatever – just slips away.  It is absolute freedom.  It is bliss.
Here’s something interesting (at least I think so): The original title of Between was Consumption.  I had this character in mind – Liz – who was burdened by so much, to such a great extent, that her thoughts were ultimately consuming her from the inside out.  She copes with these burdens by running.  She runs every day, for hours at a time.  She’s trying to cleanse herself of everything that’s become so poisonous in her life.  She’s trying to forget.  She’s trying to think about nothing.
That doesn’t always work so well for Liz, but running definitely played an integral part in my writing process when I was working on Between.  Writing is such a private, focused act.  It facilitates a sort of stillness of the mind, but you also gain the ability to access your ideas easily, almost like they’re all laid out in front of you to pick and choose from.  Finding a balance between keeping your mind clear vs. keeping it focused on a particular thought – and when to do one or the other - can be tricky.
When I worked on the book, I’d get up early in the morning and immediately change into my running clothes.  After all the day-to-day stuff was done (make breakfast, get the kids to school), I’d head out the front door and just go.  It always takes a good 2-3 miles to really get into a run, but after that, it’s almost like magic.  The mind goes still and calm.  A person tends to zone out.  Weird as it sounds, thinking about ‘nothing’ can allow a person (at least, it does for me) to become extremely focused on whatever thoughts he or she chooses to concentrate on.  I’d go out for those long runs and I’d think about Liz.  I thought about why she was running so much.  I thought about her relationships with the other characters: with Richie, Josie, Caroline, and her father.  Those mornings were fabulous, and I could not have written the book without all the peaceful meditation on the story that running provided.

Each day, when I got home after my time spent outside, I’d sit down and write.  All day.  It became a routine that I followed for months. It was like all that time spent running was also time spent letting something build inside me, and when I was finally sitting in front of my computer, I could let it all out.  I know that sounds all kinds of cheesy and ridiculous, but it’s true.  I feel certain that I could not have spent all those hours working – and that Between would have turned out to be a very different book – if I hadn’t gone for those runs.
***
This has to be one of the most inspirational blogpost we've had the honour of posting on MFB.  Thanks so much, Jessica!  Best of luck with Between & with more running and more writing.  Not that we're impatient or anything, you know?
Find Jessica's fun and informative blog here.  Between is released in the UK by Egmont.
About Between:
Only the good die young. Right? Elizabeth Valchar has it all: friends, money, beauty, a cute boyfriend and assured popularity. But on the eve of her eighteenth birthday, she is found drowned next to her parents' boat. Everyone thinks it was a tragic accident - teens drinking on a boat, a misstep leading to a watery death. But Liz is still here after death, and she doesn't know why. There are gaps in her memory. Her only company Alex, a boy killed by a car a year earlier, Liz sets out to piece together her life. But their small coastal town is hiding many secrets - about families, boyfriends and friendship. Plus, Alex hates Liz for being mean when they were alive. Was she as squeaky clean as she thinks she was? Could it be that she herself is hiding the biggest secret of all? Can Liz discover the truth? And if she does, who can she tell? An engrossing, compelling thriller that peels back the layers of small-town life to expose true, ugly, cruel human nature.
Who wrote this? Mark at 8:11 am