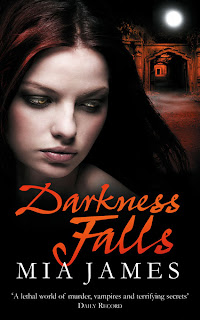 Synopsis
Highgate.
When April's family moved to the sleepy North London village of Highgate, everyone told her it was the start of an amazing new life. They didn't know the half of it. Weeks later, her father was the latest in a series of brutal killings, someone has tried to kill her, and now her boyfriend, Gabriel, is dying too . . .

Murder
April couldn't save her father, but there's just a chance she can save Gabriel. There's an ancient recipe, hidden in a forbidden book, which holds the cure. All April has to do is find it. Somehow.

Vampires
But she has to keep a low profile. In a school full of vampires, where one of their own has been killed, they're beginning to suspect they have a Fury in their midst. April's blood might be deadly to vampires, but even that won't save her if they figure out who she is.
Time is short, the stakes are high, and surviving school has never been so tough . . .
The middle book of any series is always a tough one as the story is hanging between the exciting beginning and introduction stage and a dramatic conclusion. By Midnight was one of my favourite picks for 2010 so I was excited to get my hands on Darkness Falls. The book picks up a week after the dramatic end of By Midnight. April is out of hospital but feeling a little shaken. She also has to cope with Gabriel's illness and work out a way to cure him. Alongside all of this April's father has been murdered and things at home are not going well.
I adored so much about this book. There's a great deal of detail on Highgate which suited me as I love the cemetery. If you ever get a chance to visit do go on a guided tour of the West Cemetery so you can experience the places in the book for yourself. London itself is also covered in detail which all gives the book a great sense of place and atmosphere. There are some great characters in Darkness Falls and I hope that we'll see more of the witch that April, Caro and Gabriel meet in the woods and Jessica the bookshop owner. The search for a cure for Gabriel takes April and Caro to an amazing library full of stuffed animals and secret books. I loved this part of the book and wished we could have spent more time in the museum.
But April's main problem is the conspiracy that the vampires are cooking up. More deaths take place and April always seems to be at the centre of things. So much so that the police start shooting sideways looks at her and I loved the awful psychologist Tame that is drafted in to try and find out what April is hiding. Her mother seems to have her own secrets and April finds herself alone in her race to discover who the vampire regent is before the vampires discover who the fury is. There were times in part two that I wanted to reach into the pages and shake April. She turns her back on everyone who can help her and blunders into trouble at every turn but I couldn't fault her passion and tantrums in her quest for the truth.
I have high hopes for the next instalment. At times reading Darkness Falls I was reminded of creepy, Gothic Hammer horror movies but in a good way. This book has it all, including the wise but discreet vicar, the clueless policeman, love, mystery and intrigue. A bloody, British romp of a book.
Who wrote this? Essjay at 7:30 am

I have reached the 100 page mark on this one. I am enjoying it but tiredness seems to be holding me back from getting any further. I must get back into it.