The Orphan of Awkward Falls by Keith Graves 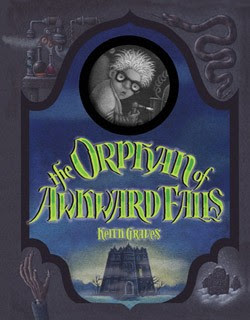 When thirteen-year-old Josephine moves to Awkward Falls she can’t help but snoop around the dilapidated mansion next door. Inevitably, she is captured by the house’s strange inhabitants: an ancient automaton who serves as a butler, a cat patched together with a few odd parts, and most surprising of all, a boy named Thaddeus Hibble. Meanwhile, Fetid Stenchley—the most feared patient in the Asylum for the Dangerously Insane—is on the loose after making a dramatic escape, and there is only one thing on his mind...revenge. Unfortunately for Josephine and Thaddeus, he’s headed their way. Can these unlikely friends stop Stenchley before it’s too late? With a penchant for spooky details, surprising twists, and haunting illustrations, Keith Graves delivers a suspenseful and engaging first novel.
I was sold on this book just from the synopsis. What's not to love about an automaton butler, escaped murderers and dilapidated mansions? I put it on pre-order and promptly forgot all about it until I got an email to say it was on its way. The picture doesn't really do it justice. The hardback cover has a hole in it which opens to reveal the full illustration of Thaddeus Hibble, Josephine and Felix the patched-up cat. The book is littered with beautiful illustrations by the author. Well, when I say beautiful - they are beautifully rendered but the subject matter might not be for everyone. One shows a corpse being dragged from its grave, another set depicts a murder. However, this is a middle grade book and it's full of traditional themes too.
When we first meet Josephine she's cross with her parents for making her move yet again. However, she loves their new home with its old copies of Poe on the shelves and, through the fog, sees an old manor house next door. Despite the fact it's night she heads straight over and gets caught snooping through the window by the automaton butler who grabs her and she meets Thaddeus. I wasn't sure about Thaddeus at first; he's described as needing some good food, sunlight and a bath. However, it becomes apparent that he's waiting for his parents to return although he can't actually remember the last time he saw them or what they look like. He shows Josephine the party hats he has out ready for them - the hats are covered in dust and my heart broke a little for him.
Meanwhile, across town, Fetid Stenchley the murderous cannibal is heading back to the only home he's ever known - Thaddeus's house. Soon they all meet with gruesome results. Although the backdrop for this story is mildly horrific with plenty of, "urgh," or, "oh, yuck," moments there's also plenty of thoughtful parts too. Josephine is a great heroine: lover of books and libraries (yay!), ultra-nosey, loyal and trustworthy. She instantly sees in Thaddeus an interesting kid who needs help and friends. She accepts his crazy life and fear of the orphanage and does everything she can to help him.
There's also a little bit of mystery thrown in which kept me guessing throughout. Oh, and zombies, don't forget the zombies. This is a middle grade book with a difference and I wish I'd had it in time to include in our MG month back in July. Anyway, I'd recommend it to any 8-12 year old (and older!) who isn't afraid of a bit of ick. I loved it as it was full of awkward friendships, strange experiments and a talking cat that had been reanimated in a giant microwave. Brilliant.

This book sounds so good! I love the sound of Josephine, I think she's a character I'd like a whole lot.

wow, Im a sucker for an amazing hardback design and this one sounds like it has that PLUS an awesome storyline. I think I'll have to check this out!!