The Dead and The Fear by Charlie Higson 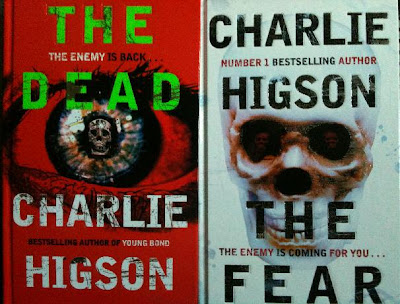 The sickness struck everyone over the age of fourteen. Mothers and fathers, older brothers, sisters and best friends. No one escaped its touch. And now children across London are being hunted by ferocious grown ups.
They're hungry.
They're bloodthirsty.
And they aren't giving up.

It’s said that the road to hell is paved with good intentions, and I think the same can be said about my groaning to-be-read shelf. I read, enjoyed & reviewed the first book in Charlie Higson’s zombie-esque apocalypse back in January 2010, and had my antennae frantically waving around for signs of the second book in the series, The Dead. Yet but then when it did land (almost a year ago now- gulp!) it got lost on the shelf. But then I saw the saw the pearly white cover of the The Fear slide from an envelope and I knew that there wouldn’t be any distractions this time.

The Dead is in fact a prequel to The Enemy and goes back about a year to when the world had just been brought to its knees by the mysterious disease that transforms anyone over the age of 14 into scabrous, cannibalistic psychos with an aversion to sunlight. As with the previous book The Dead starts right in the action as we’re introduced to best friends Jack and Ed while they’re desperately trying to evade their teachers, who are in turn desperately trying to take a bite out of them. Charlie brings us up to speed on the situation pretty quickly and smoothly (which also means that if you can quite easily read these books out of sequence and start with the Dead) and wastes no time in getting the adventure on the road as the boys hit the road to find somewhere safer to hole up.

But this is Charlie Higson’s world, and he is not a benevolent god and the predatory adults lurking in the shadows quickly throw their tentative plans in disarray. An unlikely rescuer is at hand though, and so begins their journey into London, the initial impression of safety engendered by their rescue quickly being eroded by the subtle tension building beneath the surface as we get to know a bit more about their rescuer.

What follows their arrival in the not-so-welcoming streets of London is a well balanced cocktail of Dawn of the Dead and Lord of the Flies as the survivors fragment into various groups, either by choice or by circumstance. The world they inhabit is a harsh one, and I was glad to see that Charlie wasn’t pulling any punches. Violence is omnipresent, sudden, and shocking. Wounds get infected. People starve, or crack under the pressure of this new reality. That no character is safe is a fundamental part of the constant tension that permeates the series. The combination of Higson’s flair for vivid imagery and the solidity of the world he’s created is a winner that sees the pages fly by at an alarming rate.

The Fear picks up from The Dead in a smooth hand-over and offers more of the same, inexorably tightening the various threads of the story and drawing them towards what will be a massive conclusion. Unfortunately we’ll have to wait a bit longer for the conclusion as The Fear does a great job of setting things it up but leaves it open for the next one. Still, with writing that’s this entertaining I’m happy to pick up another instalment – but just one, mind you. The Fear was feeling a bit drawn out in places, so for me the next book really needs to deliver a knockout. There’s no reason it shouldn’t, given the world and the characters he’s brought to life, but then that’s what they said about Lost..
Who wrote this? Mark at 8:00 am

I'm about 150 pages into The Dead and really enjoying it. Just like you, I waited FOREVER to pick it up, despite loving The Dead, and it was only the imminent approach of The Fear which kicked me into gear. I had no idea there'd be another book after that though..