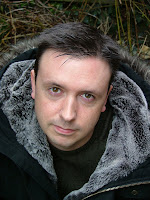 Stephen is the author of numerous young adult novels and was
the project editor of Dr Who books, video and audio in the late 90s. This is the link to his Wikipedia page. I reviewed one of Stephen's books: The Bloodline Cipher a little while ago (here) and managed to track him down for an interview. This is what he wrote back to my questions:

You have written numerous books, from your Astrosaurs books to the Wereling trilogy to numerous TV tie-in books, to name but a few. How do you sustain your pace and what do you do to relax on those rare occasions when you aren’t writing?

I do seem to be writing most of the time, it’s true, but that’s because I always want to seize opportunities when they arise rather than say no and hope someone asks me again someday. It helps that I write different things, from audio plays to chapter books, so I don’t ever feel in a rut. I relax by making music with my band and reading stacks of old Marvel comics. My office is overflowing with them…


What is your process for putting together a series like The Wereling books or even the Joshua Wish books? Do you take one book at a time or do you sit down and plan an overall bigger story and create each book to fit in with that, with other bits of plot thrown in for good measure?

With the Wereling, it was conceived very much as a trilogy from the beginning so I planned out the basic story arc of all three at quite an early stage. With Thieves, I was never sure if it was going to be a series or a standalone. I did the first one, and then decided to do another. And after that, I agreed to one more because I wanted to find out what Coldhardt was really up to – I hadn’t decided at that point!


Having asked the above question, and linked in with that, are you a meticulous plotter or do you allow your characters to stray a bit when you write the story?

I like to be sure I have a plot that works before I begin – kind of a statement of intent – but inevitably you change it as you go through. Bloodline was a bit nerve-racking because I had one character a traitor and it suddenly seemed way too obvious - so I had to give her a different destiny and change tack halfway through… I also decided to change the nature of the cipher itself, to make it more exciting. I’m a great believer that the subconscious leads us in the right direction without us realising it, especially in something like writing, and I found little bits I’d written early on that seemed to point the way towards what on some level I must have wanted to happen all along. So yes, all kinds of characters and plot points strayed in TBC but I enjoyed getting them back under control and it’s my favourite book in the trilogy.

In The Bloodline Cipher (TBC), you have Joshua and his team come up against a pretty ruthless group of people. Did you purposefully create the bad guys to be so very shocking?

Yeah, the ‘anti-talent’ are a pretty vile bunch, and I think a bit of a wake-up call to Jonah and the others that this is so easily what they could have become – what they might yet become – if they stay in that kind of life too long, get used to the violence of it.


The team fits together quite well, even if there is friction between them on occasion. Did you have any external inspiration for creating them and putting together their various and very diverse backgrounds?

I was looking for a mix of people who would be a real ragbag of ages, cultures and backgrounds, thrown together and forced to get on. It’s like, you don’t get to choose the people in your family… So I had fun imagining the past lives of these people and how that would have honed their talents and affected their behaviour. That was done before I started writing anything else.

Your writing is very visual with strong imagery throughout. Do you think that Thieves Like Us, The Aztec Code, The Bloodline Cipher, would translate well into movies? And if you did, do you have a favourite director that you think might do them justice?

When I write, I tend to imagine the action as though I’m seeing it on a cinema screen… There’s been some film interest in the books but nothing definite as yet, so if Sam Raimi wanted a look, LOL…

In TBC there is quite a bit of fighting and violence, have you ever trained in any marital arts yourself and have you ever been in a fight yourself?

No, I’m a total coward and don’t exercise anything like enough! I was attacked in the street as a teenager once but luckily escaped into a nearby pub… I grew up loving chase and fight scenes on TV, in everything from The Avengers to The Sweeney, so I enjoy sticking them into books.

Where did your idea for Coldhardt running this crack team of thieves come from?

In the third Wereling book a character is mentioned who’s a burglar specialising in ripping off supernatural residences. I quite liked the idea and Coldhardt came from there. I started wondering what happens to uber-burglars who get too old to do their thing but don’t want to retire – and decided they’d have to get young experts to help out. So really it’s the classic thing of one idea leading to another.


The research into the concept behind TBC (the ancient grimoire) must have lead you down some very interesting paths. How much research do you do for your books?

Loads! God bless the internet and the library. The grimoire I found a fascinating idea, and I read a lot about the Voynich manuscript which was all very creepy, and approaches taken to translating it, and also research into code-breaking, dialect, Chinese handwriting, all kinds of arcane stuff. I love researching things, especially as a bit of research puts off having to actually write the book! With the Jonah adventures, there’s lots of globetrotting too; and while I tried to pick locations in the three books that I’ve actually been to, there are a few I haven’t and I had to absorb no end of backpackers’ blogs, guide books, missionary diaries, etc etc to get enough convincing detail to make it a real place for me.

Away from Joshua and his gang, and back to your Dr. Who background – do you have a favourite Doctor Who?

I think Tom Baker will always be my favourite, as he’s the one I grew up with. But David Tennant is great and I’ve enjoyed writing for his Doctor in the books and comic strips a lot.

Do you have any literary heroes and in the same vein, have you ever read a book and gone “I wish I had written that!”?

I guess Stan Lee is my biggest literary hero, not for his prose – which is incredibly patchy - but for the colour of his imagination and for the way he’s inspired so many people to write, myself included. Other comic book writers like Steve Englehart and Roy Thomas and Gerry Conway spring to mind as heroes. I wish I had written the whole ‘Death of Gwen Stacy’ sequence and its aftermath in Amazing Spider-Man back in the early 1970s. I can still quote chunks of that…

Do you find that writing to background music helps you set the pace for your writing and novels?

I can’t listen to music while writing, I get too distracted. Which makes it very dull for me sitting at the computer!

And finally, you have a big following, both young and old and I am sure you have inspired a lot of them to want to write. Do you have any words of wisdom for any aspiring authors out there?

Be persistent, but be realistic. Don’t cling to treasured ideas that aren’t working. Grow a thick skin and listen to criticism. And enjoy what you do – if you’re writing for personal fulfilment first, you’re getting something out of it, whether or not publishers and plaudits follow.
Who wrote this? Liz at 7:30 pm