The Way of Shadows, Brent Weeks 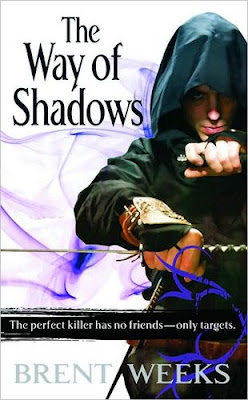 “For Durzo Blint, assassination is an art-and he is the city's most accomplished artist.

For Azoth, survival is precarious. Something you never take for granted. As a guild rat, he's grown up in the slums, and learned to judge people quickly - and to take risks. Risks like apprenticing himself to Durzo Blint.

But to be accepted, Azoth must turn his back on his old life and embrace a new identity and name. As Kylar Stern, he must learn to navigate the assassins' world of dangerous politics and strange magics - and cultivate a flair for death.”


Whatever image Azoth had of the adventurous and exciting life of a wetboy is dispelled even before Durzo takes him on as his apprentice. Much like life in the slums, death is dirty, squalid and traded as just another commodity.

It says a lot that being plunged into a life where he’s surrounded by scheming enemies and where failure means torture and death is considered an improvement for Azoth. What starts out as a relatively simple proposal snowballs gracefully into an unravelling world of intrigue, entwining his destiny with the fate of the kingdom and much more. It’s a smooth, well executed process which fleshes the characters out and expands the world around them without burying them in a landslide of exposition, a fear which I harboured given that as this is the first of The Night Angel trilogy and there would, quite understandably, be a lot of ground to cover.

I was also a bit worried that the essential nature of being an assassin would be wrapped in cotton wool or glossed over; however, Brent avoids the Disneyesque version whereby all their victims are evil men/ cardboard cutout bad guys and allows them to be assassins; who after all, kill anyone for a price (sorry, wetboys- assassins are killers devoid of the ability to use inner magic to enhance their skills, a fascinating premise). Azoth doesn’t necessarily like it, but he does it, and by doing so his character becomes even more defined and believable.

All in, Way of Shadows is a deft and clever story, skilfully delivered and I can’t wait to see where it goes in Shadow’s Edge.

You can read the first chapter here- anyone who says they didn't get claustrophobic on Azoth's behalf is a liar.
Who wrote this? Mark at 7:37 pm

Sounds pretty cool. I'll keep an eye open for that.

I have this book way up on my Wishlist. Read the blurb on-line. Found the first chapter on-line. Wanted it in my hands, right now.

Cheers DG - you won't be sorry!

I had a similar reaction -I grabbed it out of Liz's hands the moment she took it out of the packet and ran off with it :)

I read half of the book so far and to be honest it is ............... good. I really like the character Azoth/Kylar and especially the description of his development.
I read some complaints about world building on other books.

Anyway this is a book is worth reading.