The Thief by Megan Whalen Turner 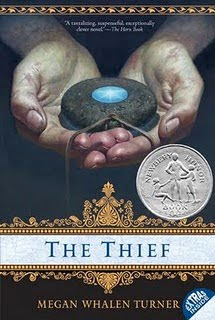 The most powerful advisor to the King of Sounis is the magus. He's not a wizard, he's a scholar, an aging solider, not a thief. When he needs something stolen, he pulls a young thief from the King's prison to do the job for him.

Gen is a thief and proud of it. When his bragging lands him behind bars he has one chance to win his freedom-- journey to a neighboring kingdom with the magus, find a legendary stone called Hamiathes's Gift and steal it.

Simple really, except for the mountains in between, the temple under water, and the fact that no one has ever gone hunting Hamiathes's Gift and returned alive.

The magus has plans for his King and his country. Gen has plans of his own.

The Thief is a rare combination of travel journal, quest and well, boasting. I bought it after Ana over The Booksmugglers became rabid about it and it languished on my bookshelf for a while before I succumbed to its charms.

It's a hugely charming little book. Very unassuming, pretty enough cover, clever premise...but does the story hold up, do the characters sizzle and does it keep our attention?

Yes, it does, very much so. Unexpectedly funny and amusing, Gen's character is a treat to read. Mutinous, sulky, hurting from being made to wear shackles, his voice is fresh and vibrant, with cutting observations of his travelling companions. You would assume someone who's just been dragged out of prison after stealing things from the King's chamber directly, would know how to shut up and stop bragging - no, not Gen or Eugenides to give him his full name. It's what he does - he's a loud braggart and he very quickly makes himself home in your head as you read The Thief.

Gen's journey with the Magus and his two helpers (whom he names Useless the Elder and Useless the Younger) is peppered with conversation and we learn that the object Gen's supposed to steal is in fact something which is a rumour, a myth, a legend.

As the story develops you come to suspect that all is not what it seems with our young thief. The way he tells the stories of the gods is a clever ploy used by the author to show us that Gen may have had a completely different upbringing to what we suspect, yet nothing is ever further explored so we are left suspecting, but never being quite sure.

His behaviour towards the King's Magus and his two helpers is one of sullen compliance. He makes sure they do the majority of the work whilst he builds up his strength from languishing in prison and being malnourished.

Gen's task is almost unsurmountable. I couldn't figure out where the author was going with The Thief. It's difficult to describe the story without doing spoilers so what I will say is: Gen is everything and nothing what you expect him to be. He's manages to double-cross the double-crossers and surprise everyone by his actions, even himself.

Just a fab read - there are several more in this series and I'll wait a while before I read them because I need time to luxuriate in reading them back to back.

Find Megan Whalen Turner's website here and a full review of the series - thus far - over at Ana and Thea, The Booksmugglers!

This sounds fab - one for the TBR pile.

Great review! I have it on my TBR pile and the more reviews I read of it, the more I'm looking forward to reading it!