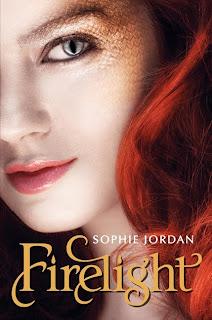 Marked as special at an early age, Jacinda knows her every move is watched. But she longs for freedom to make her own choices. When she breaks the most sacred tenet among her kind, she nearly pays with her life. Until a beautiful stranger saves her. A stranger who was sent to hunt those like her. For Jacinda is a draki—a descendant of dragons whose greatest defense is her secret ability to shift into human form.

Forced to flee into the mortal world with her family, Jacinda struggles to adapt to her new surroundings. The only bright light is Will. Gorgeous, elusive Will who stirs her inner draki to life. Although she is irresistibly drawn to him, Jacinda knows Will's dark secret: He and his family are hunters. She should avoid him at all costs. But her inner draki is slowly slipping away—if it dies she will be left as a human forever. She'll do anything to prevent that. Even if it means getting closer to her most dangerous enemy.

Mythical powers and breathtaking romance ignite in this story of a girl who defies all expectations and whose love crosses an ancient divide.

I've just finished reading a brilliant book recommendation (The Painted Man - thanks Liz!) so have been suffering from that bereft feeling you get when you want to read it all over again. I've been looking at this book on and off and finally decided to give it a try. Firelight is full of action from the first page. Jacinda and her fellow draki friend Azure are doing something they shouldn't be - flying in daylight. Found by hunters who want her for her beautiful skin and ability to find precious stones, she hides in a cave and is found by hunter Will. He doesn't betray her but more than that he finds her beautiful, not merely an animal to be killed.

By breaking the rules Jacinda's safety is at risk and her Mum takes her away in the middle of the night with her twin sister to start a new life in the desert. Jacinda's mum knows that this dry atmosphere will kill the draki inside her leaving her human. Jacinda's twin, Tamra, never became a draki and is overjoyed with the chance to move out of her sister's shadow. Everybody is happy except Jacinda.

I loved this book (apart from one gripe which I'll come to later) and the difficult family relations give it a great edge. I was as furious as Jacinda that her mum expected her to endure the dry conditions whilst the most important part of her literally withers and dies. While Tamra flourishes at school, popular for the first time in her life, Jacinda is out of place and unimportant until she meets Will again. The connection between them is instant and the development of their relationship is deliciously intense. It's not easy, both of them seem to fight against their bond. Although Jacinda is finding it difficult to transform into her draki form she finds that being in close proximity to Will feeds it. When with him her draki flourishes; a mere kiss has her skin changing and steam threatening to escape her lungs. I absolutely adored Will and Jacinda together; they're everything a teen romance should be.

Obviously there's another boy. In this case it's Cassian, next leader of the pride. As Jacinda is a rare fire-breather he expects to marry her. Of course he isn't going to let her leave the pride without a fight which adds an extra element of drama. In fact, Jacinda finds herself fighting for herself at every turn. This makes her an incredibly likeable heroine and she doesn't make one choice that jarred with me as the reader.

But now to my one negative - this book is too short. Just as the action reaches fever pitch it's over and, dammit, I wanted more. However,the cliff hanger ending is exciting. This is part one of a trilogy and I'll be first in the queue to get the next book. The best word I can use to describe Firelight is breathless. Gorgeous start to a new trilogy which I highly recommend.

My eyes popped out when I saw this cover! So gorgeous. I'll be putting it on my list of books to read when I finish the WIP. Great review!

Thanks Zoe! I think it'll be worth the wait :)

Based on your review, I went to add a sample chapter to my Kindle, but then I saw the ebook version is £7.69. (About $12 USA) I just won't pay that much for an ebook... not when even big publishers are selling ebooks for around £4-£5, and smaller publishers are around £2-£3.

Too bad too.. it sounds good.

iiLove the cover,
it caught my eye now reading this post, i defintaly want to read it! :)