Rot and Ruin by Jonathan Maberry 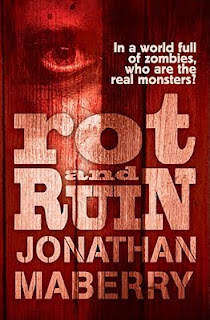 Nearly fourteen years ago a freak virus swept across the world turning those infected from the living into the undead. Benny Imura has grown-up never knowing anything different; his last memories of his parents tainted by the image of them becoming zombies.
Now Benny is fifteen, and his brother Tom wants him to join the "family business" and train as a zombie killer. The last thing Benny wants is to work with Tom ­­- but at least the job should be an easy ride. Then the brothers head into the Rot and Ruin, an area full of wandering zombies, and Benny realises that being a bounty hunter isn't just about whacking zombies.
As he's confronted with the truths about the world around him, Benny finds his beliefs challenged and makes the most terrifying discovery of all, that sometimes the worst monsters you can imagine, are human…

“Benny Imura couldn’t hold a job, so he took to killing,” runs the first line of Rot and Ruin, and while it might look like a sentence, it’s actually a viciously barbed hook.
Set in the near future, R & R introduces us to Benny, who at 15 years old, only has fragmented memories of the apocalypse that consumed his parents world. Memories that include his older brother Tom abandoning their mother to the zombies, a betrayal he can’t move past and which is pulling them apart. To make it worse, everyone else respects and admires Tom, whose job as a zombie hunter doesn’t fit well with the truth that Benny knows. Or thinks he knows.
But the rules of their fortified town are clear: he’s fifteen now, so he must be apprenticed to a trade or see his rations and privileges cut. As his options dwindle it becomes clear that he will have to do the unthinkable and become his brother’s apprentice, and cross into the zombie-infested wilderness beyond the fences. It’s a journey that will rattle the foundations of everything he believes, and forces him to grow up fast- or die. The truth hidden amongst the Rot and Ruin is an unforgiving one, and if he survives it, his life will never be the same again.
I enjoyed R & R immensely. Benny is a lively character, and his evolution, both personally and in his relationships with his brother and friends, from the angry boy in the beginning to the person he is at the end feels genuine and unforced. While the setting for the story is a relatively familiar one, it feels fresh, with the zombies a omnipresent, lurking presence, as much a feature of the landscape as the shattered remnants of the fallen world that litter it.
Interested? You can read the first chapter here.

Rot and Ruin in the first in a new series by Jonathan Maberry and the second instalment, Dust and Decay, is out in September this year. It’s going in my diary!
Who wrote this? Mark at 8:00 am

Email ThisBlogThis!Share to TwitterShare to FacebookShare to Pinterest
Labels: Dystopian, Jonathan Maberry, Rot and Ruin, Simon and Schuster, ya, Zombies

the book reminds me of the movies 'Body Snatchers' and a recent one whose title I have forgotten. It really sound a great read

I prefer the cover on this one to the other. The other kinda freaked me a bit with that eye.

I'm glad you enjoyed it and it sounds a great story. It might be a good one for me to read during the Zombie month of a challenge I'm doing on Goodreads.

So glad you enjoyed the book. Thanks for that insightful review.