An evening with Neil Gaiman 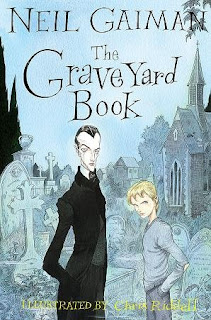 Friday, 31st October 2008
One of the highlights of my readerly and geek calendar. Mark and I got to go our and play with other fans and meet the lovely Neil Gaiman. We were standing outside to draw some money when the taxi drew up and out spilled Mr. Gaiman and his posse. Mark had to restrain me otherwise I might have been writing this from a nine by six jail cell. We allowed Mr. Gaiman and his posse to enter the building unharmed. And qued, because that is what we do.
What made it extra special is that I managed to spot Suzanne McLeod and her partner Norman at the back of the queue and I hastily made sure they joined us further up front. We professed to be all Gaiman Geeks (Registered Trademark) and gushed at one another about reading, writing, authors, agents, editors, deadlines. 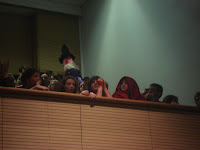 Fans of Neil "The God" Gaiman dressed up on Halloween

Suzanne and I commiserated that our mutual friend Karen could not make it due to unexpected illness. Hope you are feeling better, young miss! Watch out for an email later on.
Whilst Suzanne and I went into the auditorium, Mark and Norman lurked around the table of goodies the amazing peeps from Blackwells had on display. Each of them managed to secure a pre-signed, limited edition, hard back, slip cased copy of The Graveyard Book, illustrated by Dave "I draw for chocolate" McKean. *beams*
The auditiorium filled up swiftly and conversation was all over the place - some people went all the way and got dressed up for Halloween which I have to admit was pretty awesome. I would have loved to have made the effort but I don't think my boss would have been happy with me showing some people from Morgan Stanley into the conference room at the office dressed as a Zombie or Witch. 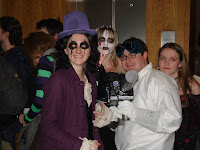 Some amazing creatures came out to play with us at the talk and signing - thank you for letting me take your photos!

Mr. Gaiman came on, chatted briefly about The Graveyard Book's premise and then proceeded to read us a chapter from the book. Chapter Five, Dance Macabre. The thing about Neil Gaiman reading his own work is: you are right there with him. His intonations and inflections emphasise the excellent prose - The Graveyard Book is made to be read out loud. I will be ordering the audio for sure. 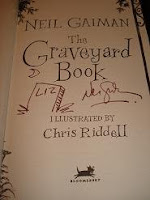 The reading went quickly - it was over way too soon, for all of us. But it was not the end of the evening by a long shot. Mr. Gaiman then answered a handful of questions the audience wrote out for him. Mark was particularly thrilled as his question was: "Will you be writing another script after writing Beowulf? Also, please note: Beowulf Rocked!" and Mr. Gaiman answered in the affirmative - yes, he is working on a script for Anansi Boys and Neverwhere. Yay!
We got into the queue after all the questions were answered and we each got to have a very brief chat with Mr. Gaiman as he signed all our books. We were lucky enough to get seats, second row from the front, which you have to admit is pretty darn good. During his talk, Dave McKean arrived and once Mr. Gaiman had signed my advance copy of The Graveyard Book, Stardust and Preludes and Nocturnes and the limited edition Graveyard Book, and he signed Mark's ancient copy of Good Omens (signed by Terry Pratchett in 1997) we hustled over to Dave and had him sign Preludes and Nocturnes and the limited edition Graveyard Book. A bit of a result, all in all. Plus, Mark and I both managed to speak words and not just giggle nervously and spit or drool in our effort to be witty and charming. 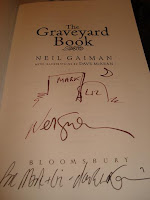 The limited edition personalised to Mark and I, by both Neil Gaiman and Dave McKean 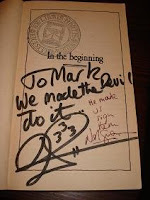 Suzanne and Norman joined us for dinner at Pizza Express and we chatted non-stop about spooky events we've heard of and experienced and Suzanne and I had geek moments about how cool Neil Gaiman is and how effortless he makes it all seem. 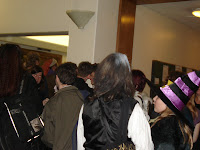 It was an amazing evening and I was so pleased that I could share it with another author whom I admire greatly for her talent and skill. It was the first time I met Suzanne and I have to say: you can't wish to meet anyone nicer. We spoke at length about her own writing, her research she's been doing and that the deadline for the second book is fast approaching. I think I am more excited about it than should be healthy!
We reluctantly said good bye and made our respective ways back home / hotel, in Suzanne and Norman's case. I couldn't stop stroking my newly signed books, much to the horror of one of the people on the train next to us. At least I don't think I called them "my precious."
I think.
Who wrote this? Liz at 3:09 pm

Great write-up, Liz - really good to read how it all went. Glad you got to speak to The Man. :)

And not drool or spit - it was indeed pretty cool. There is however next time and we'll all be there - as the Gaiman Geeks.

LOL - hey, I'm in that picture! I wish I could say that my costume was as amazing as those of the friends' I came with, but alas I had to come straight from college, and Courtesan was all I had time to whip together.

Glad you had fun! And jealous you got a book signed, we eventually gave up as it was nearly a two hour wait from where we were in the line :(

Damn, it sounds like a great night. I wish I'd had the time to take you up on your offer of a ticket! Next time...

I've just been sent 'Prince of Stories' (a Neil Gaiman biography/discussion of pretty much everything he's ever written. I probably won't have the time for a read, do you want it?

Love the doodles in your signed copies :o)

I'm going to be receiving a Subterranean Press edition for Crimbo ... I love my man!! But, even that's second-best to hearing him read aloud, and get an in-the-flesh signing and 30 sec question.

And, OMG a Neverwhere script ... ye Gods have been listening. The BBC version is still a guilty pleasure, irregardless of lack of budget etc. And my signed and doodled "MIND THE GAP" paperback is falling apart. I'm soooo stoked at this news.

You know, I've not actually seen the BBC Neverwhere show - I will have to get a copy. Neverwhere was what we read when we first moved to London - naturally we were consantly looking for girls reading newspapers where there weren't newspapers originally. :-)