Unhooking the Moon by Gregory Hughes 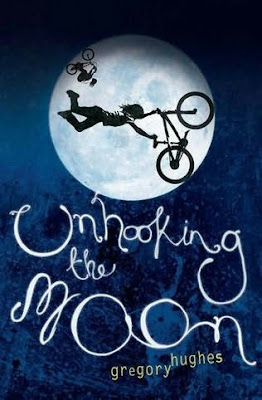 Meet the Rat: A dancing, football-playing gangster-baiting ten-year-old. When she foresaw her father’s death, she picked up her football and decided to head for New York. Meet her older brother Bob: Protector of the Rat, but more often her follower, he is determined to find their uncle in America and discover a new life for them both. On their adventures across the flatlands of Winnipeg and through the exciting streets of New York, Bob and the Rat make friends with a hilarious con man and a famous rap star, and escape numerous dangers. But is their Uncle a rich business man, or is the word on the street, that he something more sinister, true? And will they ever find him?

It is my dream to fall in love with the characters I meet in new books. This was indeed the case with Unhooking the Moon by Gregory Hughes. Written from Bob's point of view, we are an audience to the craziness that is Rat. Yes, his sister is really called Rat. And she is really a bit unhinged, or watching her antics from Bob's perspective, we are almost convinced that she is crazy. What she really is, is unique and loveable and a bit strange, full of energy and a wisdom beyond her years. We meet the siblings as they go about their unusual lives on the outskirts of Winnipeg. They live with their dad, who is basically being paid by the State not to farm. Their mum had died a while ago and so the three of them live what could easily have been a very quiet life. Rat however makes sure that this will never happen. With Bob in tow, they ride around Winnipeg with their bicycles, creating all kinds of fuss. Rat knows everyone and everyone knows Rat, even the cops pull over to chat to her.

I wasn't very far into Unhooking the Moon when I realised how much I had already vested in these two characters. When their dad passes away and they decide to head to New York to find their long lost uncle, I was shouting at them to not be stupid, they were only kids, it was dangerous and if their uncle really was a drug dealer, well, dammit, they shouldn't be around him anyway.

Of course, Rat and Bob did not follow my shouting directions. They got as far as the Canadian border before they met up with Joey. Joey is obviously yet another person I wouldn't want the kids to meet up with. He smuggles things across the border but eventually agrees to help get both Rat and Bob across. And it turns out Joey is actually a pretty good guy, just a bit misguided. We all know someone like this, someone who likes to think big, outside the box, and only needs a good deal to come his way.

Joey leaves the kids in NY with directions on how to find a friend of his, who will give them somewhere to stay. The kids travel around the Bronx asking everyone they come across if they know their uncle. They meet some bizarre and lovely people along the way. As the story unfolds and things become more and more odd and probably surreal, with them hanging out with con-artists, thieves and up and coming rap stars, the two main characters' innocence is highlighted. So many bad things could have happened to them yet they have this knack of finding people as unique as they are to help them in their quest.

I sobbed like a little girl at the end of Unhooking the Moon. It really is one of my favourite books for 2010. The writing is skilled, the characters are sharp, the story is fantastical and wonderful and the bittersweet ending is pitched just perfect. I cannot praise Gregory Hughes enough - there is something truly magical about this debut and I think he strikes the right note with the overall story, making Rat one of my favourite literary characters of all time. I hope it goes on to win prizes and the acclaim it rightly deserves.
Who wrote this? Liz at 8:45 am

Sounds great. A single memorable character can make such a difference to a book - and its readers - can't it? Many thanks: I'll definitely put this on the list to read.

I'd heard that this was amazing, but now it sounds even more wonderful. Thank you for the fabulous review!

Really? Wow!
I have this book at the bottom of my TBR pile and I just dug it up to puf on my desk and read it next week.
That's how amazing your review was :)

And I haven't said it in you previous post, but this is a fantastic initiative! *you rock* :)

@Linda - I tell you, if more characters were as engaging as Rat, we'd have no problem getting gets to read and keep reading.

@Caroline - my friend, it is one of my top books of the year. I am so pleased to have read it. I can't stop thinking about it.