The Book of Bones by Natasha Narayan 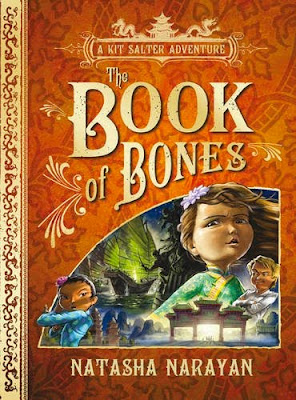 Kit Salter and her friends Rachel, Waldo and Isaac tumble into another adventure when their coach is hijacked on the wilds of Dartmoor. Their arch enemies, the Baker Brothers, are behind the kidnapping. They force the children into a perilous voyage to China in search of a secret martial arts manual. From bustling Shanghai, their journey takes them to the hidden heart of Imperial China – Peking's Forbidden City. En route they battle opium smugglers, pirates and kung-fu fighters, before a climatic encounter with the mysterious Wooden Men, giant killers armed with lethal powers and a dastardly will of their own. Will Kit and her friends survive the danger and mysteries of China and win back their freedom? Find out in this twisting, thrilling adventure.

I am back to tell you about the third Kit Salter adventure, Book of Bones. In the Mummy Catcher of Memphis and the Maharajah's Monkey we got to meet Kit and her group of friends. I loved Mummy Catcher a lot, whilst Maharajah's Monkey was good fun but I didn't love it as much. However, in Book of Bones, poor Kit and her friends are thrust into the heart of a nightmare. When their coach is hijacked, complete with their dippy new governess Kit, Waldo, Isaac and Rachel are non-plussed. What exactly is going on? Who are the villains?

This answer is soon revealed. In Maharajah's Monkey, Kit came across the Baker Brothers, a nasty pair of brothers who have been dabbling in magics no human should attempt to play around with. These two are in fact the ones who abducted Kit and her friends, using their governess as the one to lure them out.

In an adventure that sees the friends travelling from England to China then onward into the heart of China to an ancient monastery in order to find the mysterious Book of Bones, the group faces being poisoned, shot at, chased, called assassins and all manner of other things. But the fact remains that one of the group was actually poisoned and is to die, if the antidote is not taken. This is the Baker Brothers' plan to ensure they return to them with the Book of Bones.

I loved this little book - it is so deceptive; it looks small in size but the writing and the adventure is huge and full blown. Kit Salter is a fantastic heroine. The writing is good and it really flows well. Kit's friends, Waldo, Rachel and Isaac are sweet kids, and there are glimmers of them developing very much into their own creatures with Kit, the heroine, being the strongest character by far.

Set in a time when the opium trade was at its height, where people could be kidnapped and mysterious aunts worked for the government, the novel really "harkens" back to a different era. The enormous amount of research that went into this is hardly perceptible. We get snippets of information about China, the opium trade, the socio-political goings on etc. but honestly, it never overshadows the story. It enhances the background but never intrudes and it is for that reason that I think Natasha Narayan is a bit of a legend. We learn, without realising that we're learning.

An excellent book to curl up with on a dark evening. It is geared towards confident young readers and may very well get a look into by reluctant readers. If for nothing else, the overall adventure and the cliff-hanger ending. It is driving me to distraction not knowing what's going to happen. I realise it's greedy of me, but I can't help it. It's just out and I am already impatiently waiting for the next one. Yes, I'm a brat, but I'm allowed to be. So there.

I also apologise for the short review - I am not being purposefully vague this time around, it is a pretty involved plot and I am loathe to give away spoilers of The Book of Bones but needless to say it is aces. As an action adventure book nut, this one holds its own (and is in fact better) against some adult action adventure novels in the ilk of Paterson, Brown, Gibbins. Oh, the one thing I did want to say is: even if you've not had the chance to read the previous two books, you can pick up The Book of Bones and read it without concern about the backstory - the readers very quickly and adeptly gets filled in on what has gone before, but only as it pertains to this story. So you can go back and read the others retrospectively.

Sounds interesting, and I thoroughly enjoyed the first in the series but . . . a cliffhanger ending? No way! To my mind, every book should end in a satisfying way, with the particular story all tidied up, even if the over-arching conflict continues. I may consider reading and recommending this when the next bit comes out (if there are no further cliffhangers!)