The Battle for Gullywith by Susan Hill 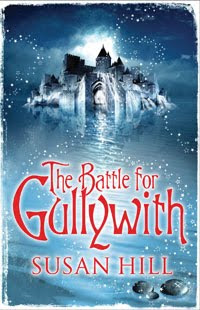 When his family moves to Gullywith Farm, Olly just can’t imagine being happy in his new home. Gullywith is the coldest house in the world and no one has lived there for years. Then Olly meets KK and she tells him locals won’t go near the place. It seems to be jinxed ... but most strange of all, Olly notices that there are stones at Gullywith that can move around of their own accord. Stones with ancient markings on them. He feels sure that they are angry.

Olly visits the mysterious Nonny Dreever to ask his advice and he tells them they must return the stones to Withern Mere. Olly is drawn into a world of myth, magic and midnight adventure deep inside the surrounding hills. What is the ancient power that controls the stones and can anything be done to end their hold over Gullywith?

I was excited to read this as it's by the fabulous Susan Hill. With high expectations I started reading and was whirled into Olly's world. Olly was happy with his life at 58 Wigwell Avenue in London and doesn't understand why his parents are desperate to move to a dark, cold house that they've bought at auction. Unfortunately, he has no say in where they live so he's packed into the car with his little sister Lula. Once installed at Gullywith he finds rooms where stones seem to gather, stones with weird inscriptions on them. He soon meets KK, a girl who lives over the hill and Nonny Dreaver a man who lives on a house on stilts full of bats and the odd tortoise. The stones believe that Gullywith belongs to them which means that Olly and his family aren't welcome there.

I loved that there are two stories in Gullywith. One shows Olly's parents following their dream by taking their family to the country and living their idyllic lifestyle. As with most things the reality isn't quite what they imagined. Obviously not understanding the magical powers that are gripping their home they see the floods, mould and collapsing walls as signs that they've made a mistake. Just as Olly finds that he can't bear to leave they are considering their next move. One of the strongest themes that runs through this book is the way that Olly is loved and cared for but his parents are completely unaware of what drives him. They arrange a, "play date," with the awful Mervyn oblivious to the fact that they hate each other. The mysterious world of children carrys on unnoticed by both parents. There are adults who are, "in" on the mystery like the Merlin-esque Nonny and the mysterious book seller.

The other story shows the reality that the parents can't see; a battle between Olly, Nonny, KK and the stones for Gullywith. This becomes more dangerous as the story progresses. There's real menace and some chilling scenes throughout. Even the local fair quickly becomes threatening as a storm errupts and Olly and his friends are chased away.

Refreshingly, Olly isn't interested in computers like his dad but is obsessed with maps like his grandad. KK and her brother Zed often wake Olly in the middle of the night by throwing stones at his window. There are no mobile phones and the only time Olly watches TV is when he's visiting Mervyn's hideous sanitised house. This gives the whole book a slightly old-fashioned feel, but it's made all the more wonderful for it. Olly starts the book with, "London legs," worried by how far he's walking but becomes more resilient and resourceful by the end.

I loved this book. It's magical and a real escape. I regularly re-read Susan Cooper's The Dark is Rising books and have never found anything that has the same mix of adventure and a feel for folk law and tradition. I found it in The Battle for Gullywith and hope that there's a sequel. I'm always looking out for tortoises too, they're very wise you know.
Who wrote this? Essjay at 7:30 am

SOLD! I am buying a copy of this tomorrow.

This sounds ike a fun one, and I'd never heard of it--thanks!