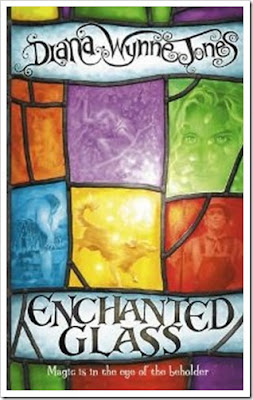 When Andrew Hope's magician grandfather dies, he leaves his house and field-of-care to his grandson who spent much of his childhood at the house. Andrew has forgotten much of this, but he remembers the very strong-minded staff and the fact that his grandfather used to put the inedibly large vegetables on the roof of the shed, where they'd have vanished in the morning. He also remembers the very colourful stained glass window in the kitchen door, which he knows it is important to protect. Into this mix comes young Aidan Cain, who turns up from the orphanage asking for safety. Exactly who he is and why he's there is unclear, but a strong connection between the two becomes apparent. There is a mystery to be solved, and nothing is as it appears to be. But nobody can solve the mystery, until they find out exactly what it is!

Diana Wynne Jones is a new-to-me-author. But she's not a new author, of course. Having seen her on the bookshelves at various bookshops and having seen Howl's Moving Castle, I knew who she was, but I've not read any of her books. Until now. I was eventually tempted to buy Enchanted Glass because I loved that cover so much and wanted to own it for myself. I had also heard from the media online that it is a pretty ace book.

I leapt into Enchanted Glass and struggled a bit. I really had issues with her voice and for the longest time I couldn't figure out which way the book was going as it seemed to be a little bit directionless.
*rolls eyes*
Oh, the stupidity of me. HOW could I have doubted someone as skilled as Diana Wynne Jones? Where I thought I was the one floundering, I was being shown Andrew Hope's slightly aimless existence as he moves into his grandfather's old house (Meltstone and tries getting used to everything there. We are shown the peculiar members of staff he has to deal with on a day to day basis and how people in the nearby village fully expect Andrew to know about this mysterious "field of care" business. What is that anyway?

Everyone seems keen to run poor Andrew's business for him. Everyone except young Aidan Cain whom I personally grew to like a great deal. Aiden's grandmother has passed away and he's run away from his foster parents to Meltstone House as he was told by his Gran that he would be safe there.

Andrew was fond of his grandfather and loved his time at Meltstone House as a child. But too many years locked away in an office, lecturing and forgetting that real magic is closer than you might think, has dimmed his perceptions to what is clearly a not average household and responsibilities.

With the help of Stashe Stock, an organised, slightly bossy young woman, Andrew has no choice but to try and figure out what exactly is going on in Meltstone House. On his plate is a border dispute with the obnoxious Mr. Brown who seems intent on taking land that does not belong to him (and threatening neighbours with it), what is the real story of Aiden Caine, what or who is the mysterious creature that eats the oversized vegetables Andrew leaves on the roof of the shed (as instructed by his grandfather all those years ago) and will Mrs. Stock ever stop moving the furniture around? But most importantly, what exactly is this field of care he has been given the responsibility for and what does it do? And what should he do about it?

I genuinely loved this book. It took me by surprise. My initial thoughts were not flattering at all and then suddenly, when I realised what was going on, how things fit together, I had a real facepalm moment of: how did I not see that happening?

Enchanted Glass is a tremendously enjoyable novel for younger readers but also for older and adult readers. It has action, adventure, mystery, suspense, nasty creatures, good people, shapeshifting dogs and countrylife shenanigans. It really has it all and it is written so well. I have got two other books lined up to read by her too, for later this month, so I've definitely become a fan.
Who wrote this? Liz at 3:43 pm

I've read some books of DWJ in the past and really liked her way of writing and the slightly mad setting she seems to have a knack for.
Will have to give this book a try if I come across it :)

Thanks for the review. I love Diana Wynne Jones. This book is on my wishlist already... I just haven't gotten around to getting my hands on it yet.

(If you only read one other DWJ book, you must read Howl's Moving Castle. It's so much better than the movie. It's one of my very favourite books... after Fire and Hemlock, but that's not everyone's cup of tea.)

I keep looking at this beautiful cover in one of the local libraries. Your review is terrific, thanks Liz
I will be making room in my TBR pile :D

I haven't read this book, but I love Diana Wynne Jones style of writing, and my absolute favourite is Fire & Hemlock, every time I read it I see something new and different, I read it as an 11 year old girl, and love it just as much now as a 34 year old woman!
I'll be looking for a copy of Enchanted Glass I think!

Oh glad you liked this one! My favorite DWJ book is still Howl's Moving Castle. I want to read this one as well but I might wait for it to come out in paperback since I still have other DWJ books in my TBR.

I really should read more of Diana Wynn Jones, everything I read of hers is amazing and it sounds like one is no exception. Plus that cover is gorgeous. Will look out for it!

Thank you for this recommendation - I've reserved it from the library, and really look forward to reading it.

I read a couple of DWJ books last year and really enjoyed them, did take a little to get into them though (she really doesn't believe on guiding you into the story gently! It's a bit like being dropped into the middle of a conversation, and being expected to contribute straight away...) but in the end that was one of the reasons I enjoyed them.

Looking forward the the Crestomanci books I picked up recently.

Some of my favorite books are by DWJ's. I'm glad you reviewed this. I'm going to check it out.